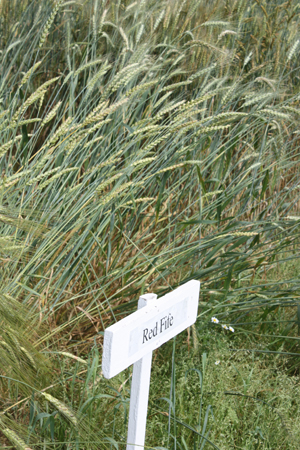 Stacey Shackford
An authentic variety of heritage wheat Red Fife has been resurrected thanks to the efforts of Cornell plant breeders.

For a grain, red fife wheat has a colorful history. Famed for its flavor, it is believed to have crossed several continents and the Atlantic before arriving in 1842 in Canada, where it gained a foothold and spawned many modern varieties.

It is now enjoying a revival, and farmers, millers and marketers are eager to get their hands on authentic seeds from this original “ancient variety” of heritage wheat – but Cornell scientists have discovered some sources are not necessarily what they seem.

While testing red fife seeds from a local source, plant breeder Mark Sorrells found traces of semi-dwarfs – varieties that are shorter in height but higher in yield – that didn’t exist until the 1950s, and therefore, could not be the original.

Using a combination of modern science and old-fashioned research, consulting early 19th-century agricultural journals and illustrations, Sorrells believes he has isolated the true red fife and is now growing it in Cornell fields in Freeville.

“We’re going to make it available for organic farmers, and now they will know they are getting the real red fife, not seed contaminated with modern varieties,” said Sorrells, professor of plant breeding.

“Making sure a variety is what the seller says it is, is really important,” he added. “People want red fife. If what they get does not live up to their expectations, the farmers and millers lose their market edge.”

Unlike other breeding projects that concentrate primarily on production and yield, flavor plays a central role in Sorrells’ study – so much so, he is working with collaborators in New York City to arrange sensory panels at the Culinary Institute of America this winter.

Before university breeding programs, farmers selected seeds based on what grew best in their fields. In many cases, they chose based on appearance, and gave them alluring names to appeal to other farmers.

“Some are very interesting to look at, but they don’t yield very well or have poor baking and milling properties,” Sorrells said. “We are trying to find ones that will work well.”

Other heritage varieties gaining attention include emmer, spelt and einkorn. They have differing levels of protein, and some are sought out by people with gluten intolerance.

At a recent field day in the Hudson Valley, attendees were clamoring for information about heritage varieties.

“People want unique flavors and colors, and they want them grown locally,” Sorrells said. “We’ll be trying to verify some of the unique properties of nearly 100 varieties.”

The study, now in its second year, is funded through a $2.3 million grant from the U.S. Department of Agriculture National Institute of Food and Agriculture.