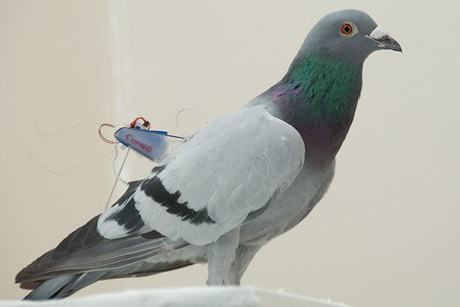 Courtesy of Michael Shafer
A pigeon with a Cornell mini backpack. 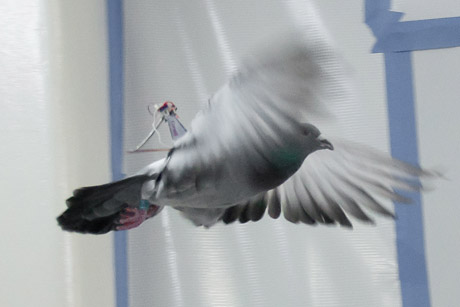 Courtesy of Michael Shafer
With a lightweight power supply on its back, a pigeon takes flight around an engineering laboratory. 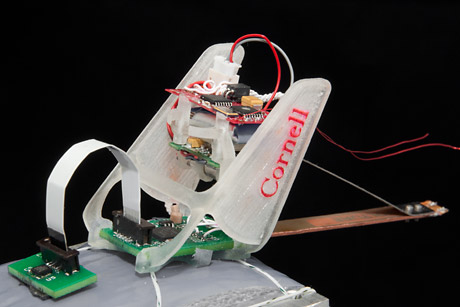 Courtesy of Michael Shafer
A close-up view of the Cornell-designed, removable bird backpack that provides energy for in-flight experiments.

Cornell’s Laboratory for Intelligent Machine Systems, or LIMS, is developing an ultra-lightweight energy source for small backpacks packed with sensors. The miniature vibrational energy harvesters convert the motion of a bird’s body into electrical power. Ephrahim Garcia, Cornell professor of mechanical and aerospace engineering, runs LIMS, and he delves into dynamics and controls, sensors and actuators that involve smart materials.

“You can’t put a 9-volt battery on a bird, so you need a lightweight energy source,” says Michael Shafer, Cornell doctoral candidate who will get his degree in August and begin a new job as an assistant professor at Northern Arizona University.

Shafer is testing his system of removable backpacks and power sources on homing pigeons, which weigh about 300 grams. The birds can carry only about 4 percent of their mass – or about 12 grams (less than one tablespoon of water) – without disrupting their natural flight dynamics.

Much like human-made aircraft, birds employ aerodynamics and balance. They have a center of gravity and roll control – like the roll and pitch of an aircraft. If the ornithological backpack weighs too much, birds cannot maneuver back to an upright position – and fall to the ground.

Despite the light weight, the tiny backpacks condense engineering brilliance, as they feature a microcontroller, an accelerometer, a memory module, a wireless receiver and a piezoelectric device that serves to transduce the harvested energy into electric power. The harvester gathers up to 300 microwatts, enough juice to power the microcontrollers.

Garcia explains that like canaries in the coal mine, birds outfitted with these systems could serve as environmental sentinels. While other scientists gather information on bird behavior and the impact of environment, his labs focuses making that data possible.

Says Garcia: “Unlike engineering systems of the past, we are creating self-reliant systems. They gather power from their environs to perform their mission indefinitely.”