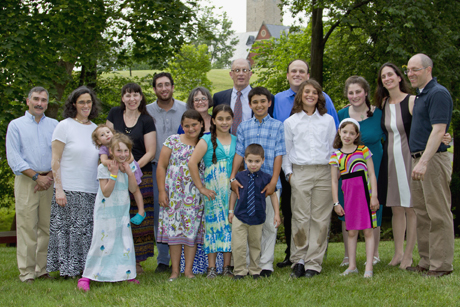 Planning their 50th wedding anniversary, Sam ’61, M.D. ’66, and Judy ’62 Greenblatt considered taking their family on a cruise. But they ended up celebrating their golden anniversary in a Big Red way: Along with 12 members of their immediate family, the couple spent a week at Cornell’s Adult University (CAU) in honor of a marriage that originated far above Cayuga’s waters.

During July, the Greenblatts, their three children, their spouses and a total of six grandchildren all attended CAU’s summer program together. The adults took courses ranging from Witnessing the Cosmic Dawn to The Brave New World of Fiber, while the kids, ages 4-12, did camp activities. They all stayed on the same corridor in North Campus’ Court-Kay Hall.

“We started dating my sophomore year, his junior year,” Judy Greenblatt said. “We’ve been together ever since.” 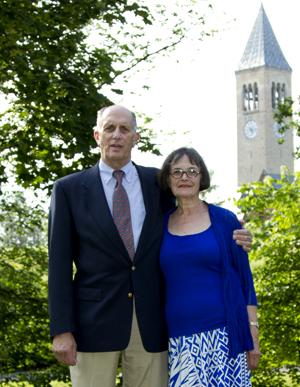 It’s the first time the Greenblatts have brought this many family members to CAU at one time, but they’re no strangers to the program. Since the early days of their marriage, they have attended CAU almost every summer. Their three adult children, Rachel, Dan and Miriam, grew up knowing CAU was “just something one does in the summer – a part of life,” Sam Greenblatt said. As a 1 year old, Miriam, who now has two children of her own, took her first steps on the Arts Quad during CAU.

In the last two years, the Greenblatts have taken to bringing two grandchildren to CAU. But everyone at once – this was a first. They don’t quite remember whose idea it was to celebrate their 50th this way – probably one of their three children – but given the family’s deep Cornell roots, it seemed a proper tribute.

Sam, a professor of neurosurgery and neuroscience at Brown University, and Judy, a librarian, met at Cornell and began dating in 1962 and they married in 1963. They were introduced by Judy’s older sister, Susan (Shapiro) Prohofsky ’60, who also met her husband, Earl Prohofsky, Ph.D. ’63, at Cornell.

Rachel Greenblatt, the couple’s eldest daughter, is Cornell Class of 1990, and her husband, Jim Appelbaum, is Cornell Law School Class of 1990. Judy’s parents, though not Cornell alumni, met at Cornell in summer school during the 1930s.

During their weeklong CAU family adventure, the Greenblatts did have an official anniversary party, at Taughannock Farms Inn – one of their favorite Ithaca spots – to which friends and even more extended family – including a nephew, Benjamin Greenblatt ’00 – made the trip to Ithaca from far-flung places.