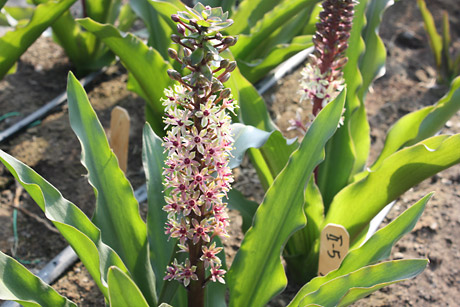 Alex Koeberle/CALS
Eucomis, or the pineapple lily, is being grown in Cornell greenhouses to see whether the warm-weather flower has potential as a New York nursery crop. 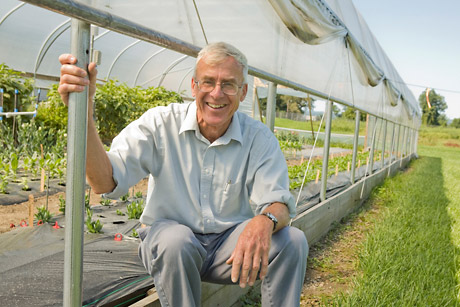 With its long, speckled stalks, vibrant flowers and long vase life, the pineapple lily appeals to those who appreciate brash, beautiful blooms.

It could also provide new opportunities for Northeast nurseries, according to Cornell horticulturists who would like to see the South African native take root in upstate New York.

Chris Wien, professor of horticulture, experiments with cut flowers to determine which varieties hold the most promise for the state’s $6.3 billion nursery industry, and he believes he’s found a winner in Eucomis.

It has many advantages, he said. It is relatively easy to grow, and in high numbers; the only required input is water. It can last more than three weeks in a vase. And with its hundreds of 1-inch starry flowers, 30-inch stalks, and namesake pineapple-shaped spikes at the end of each stem, it looks spectacular.

The challenge is getting the plant to thrive in cooler climates, but Wien said he has found a way to overcome that barrier.

“Despite not being hardy enough for the field year round, we found that pineapple lily successfully winters over with unheated protection, in greenhouses,” Wien said.

Floriculture Field Day
The 11th annual Cornell Floriculture Field Day will be held Aug. 13 at the Cornell Veterinary College Education Center on Bluegrass Lane. This year’s theme centers on plants that thrive in summer heat, and talks will include “Tuberous Trips and Rhizomatous Romps through the Summer Bulb Garden” by horticulture professor Bill Miller. There will also be presentations on integrated pest management, invasive species and impatiens downy mildew, as well as guided garden tours, a container design competition and an ice cream social.

The pineapple lily may be new to the Northeast, but not to the United States. It has already been grown successfully in Virginia and states further south.

Four varieties of the species are blooming in university greenhouses on Maple Road – with plans to be grown in the high tunnel greenhouses soon – and they will be on display at Floriculture Field Day Aug. 13.

Wien hopes to convince local growers to add pineapple lilies to the 30-40 varieties of flowers grown commercially in the Ithaca area.

“With the trend for more local food, there is also a rising trend for locally grown flowers,” Wien said. “I believe the pineapple lily is a very viable option.”

Wien’s work with the pineapple lily is funded by federal HATCH funds, with planting material donated by commercial bulb grower Jack de Goede in the state of Washington.