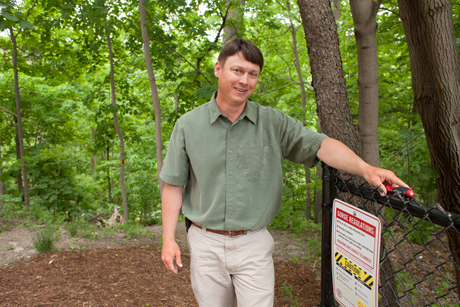 As director of natural areas for Cornell Plantations, Todd Bittner manages 44 preserves, sprawled out over 3,400 acres. It’s a daunting task, especially when faced with a fierce foe-like hemlock woolly adelgid, an aphid-like insect that feeds on plant sap.

The Plantations has more than 700 acres of hemlock forests, making treatment for all sites and all trees unrealistic. Therefore, Bittner’s adopted an adaptive management framework that involves evaluating the issue, its potential impact and the effort required to address it; making a plan; identifying priorities within that plan; carrying out the plan; assessing outcomes and re-evaluating future strategies.

“It’s a continuous process that we work through. We do it by species, by site or both,” he said.

His team evaluated the conservation and educational value of each of the main hemlock stands and developed a list of eight priority sites. Old growth hemlocks became a priority to preserve, as did hemlocks growing along the gorges that provide erosion control as well as cool and shaded microclimates for many other diverse species of plants and animals. Those along Beebe Lake were also deemed important because of their frequent use as educational aids to thousands of students and visitors.

Over the past four years, Bittner’s staff has treated 856 hemlock trees with imidacloprid – a pesticide that lasts about five years – including 300 hemlocks in 2012 alone. Bittner has also given over one area in Lansing for the controlled release of a beetle that is a natural predator of the hemlock woolly adelgid and is being studied as a potential long-term pest management solution.

He also contends with many other perennial problem-makers, such as garlic mustard, pale swallowwort, Japanese knotweed and stilt grass. In fact, a target list of moderately to highly invasive plants that Plantations staff looks out for is 75 species long.

“There are two dozen priority invasive species that we are managing at any given time,” Bittner said.

Then there are all the other things that draw his attention away, including gorge maintenance, deer management, educational and recreational programming, and rare species conservation.

“We can’t afford for this to become the only thing that we focus on, but if we had that luxury, we would – it’s that big of a challenge,” Bittner said.

The next big battle in his sights: emerald ash borer. It’s an even fiercer foe than hemlock woolly adelgid, killing tens of millions of ash trees across the United States. There’s little that can be done to control infestations once they happen, so the nationwide strategy so far has been to stop the bug’s spread.

Bittner said he is currently conducting an inventory of ash trees across campus and in Plantations natural areas to determine potential safety, cost and ecological ramifications.

“We have a lot of challenges with invasive species, both plants and pests. We don’t have any expectation that it isn’t going to be a long-term issue,” he said. “We talk about control, not eradication.”

“It does matter what people do. They can feel good knowing they have helped protect our forests, wetlands and meadows,” he said. “We can all be part of the solution.”