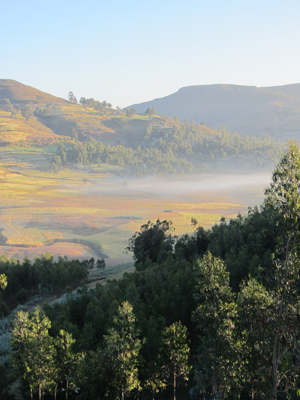 Morgan Ruelle
Eucalyptus trees are becoming a common sight in the landscape of the Semien Mountains of northern Ethiopia.

Eucalyptus is becoming a dominant tree in the highlands of Ethiopia. The flowering trees that originated in Australia are surprisingly well suited to the region, says a Cornell graduate student. They grow quickly and do not require fertile soil. In Ethiopia, most eucalyptus species do not reseed on their own, so they do not become invasive. They provide shade and can be sold or used for cooking fuel, construction, fencing and medicine.

But: Eucalyptus trees also require a lot of water, which can dry up a landscape and exacerbate the impacts of climate change.

Morgan Ruelle, a Ph.D. candidate in the field of natural resources at Cornell, is working with indigenous communities in the Semien Mountains of northern Ethiopia as they swap out many traditional crops, including barley and wheat, for this introduced species.

“At first glance, eucalyptus seems like the perfect tree,” said Ruelle. Since it was introduced to Ethiopia more than 100 years ago, “it has since become an integral component of local farming systems.”

But the trees can affect movement and distribution of water in an area, and therefore, affect many other important plants, including crops and useful non-cultivated species. 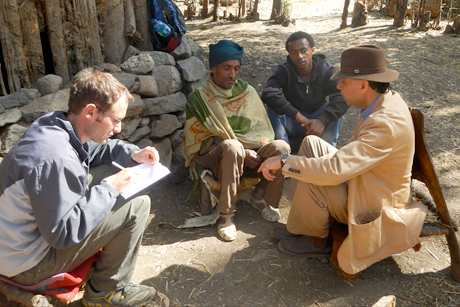 The landscape of the Semien Mountains has a variety of “micro niches,” each  having its own set of plant species. Farmers rely on many of these plants as sources of food, medicine, fuel, fiber, forage and construction materials. A single change that affects plant diversity can have multiple impacts to the ecology, culture and economics of the region. Therefore, it is important to understand the interconnected impacts of planting an introduced species such as eucalyptus, said Ruelle.

Ruelle is attempting to integrate Western-scientific and indigenous knowledge to identify valuable yet vulnerable plant populations and the conservation practices that can sustain their use in the face of social and ecological change.

He works closely with one family in each of 18 villages to build strong relationships. He engages them in participatory research, such as community meetings in which people from low and high elevations are encouraged to share their knowledge about the affects of eucalyptus and climate change on local plants. To build resilience and reduce the vulnerability of food systems security to climate change impacts, it is important to maintain traditional knowledge and plant diversity, and to share knowledge between Semien communities and indigenous communities around the world, Ruelle said.

Ruelle’s work, which is supported by the National Science Foundation, is one of many projects, advised by Karim-Aly S. Kassam, international professor of environmental and indigenous studies, examining the significance of indigenous knowledge in mountain communities adapting to climate change.