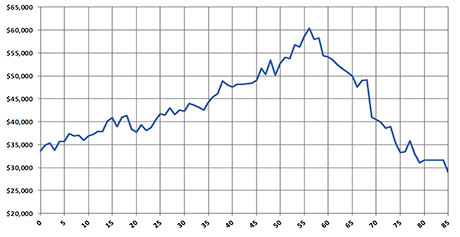 Provided
How the Baby Boomers will bring us down. Most people's incomes increase over their working years, but drop sharply after retirement. The large cohort of Baby Boomers who wll retire over the next two decades will be a major force reduce the nation's median income. (U.S. Census figures for 2010)

The median household income for Americans reached an all-time high in 2000, fell during the recession of 2001, and was only approaching its 2000 level in 2007 when the Great Recession struck. By 2011 it had fallen back to 1997 levels. Now, changes in demographics over the next two decades will make it even more difficult to raise the median, according to a Cornell economist.

“The average American is increasingly going to be black, Hispanic and older. Unless [these demographic groups] earn considerably more than has been the case in previous decades, the average American’s household income is likely to fall,” said Richard Burkhauser, the Sarah Gibson Blanding Professor of Policy Analysis in the Department of Policy Analysis and Management in the College of Human Ecology.

Without important changes in public policy, these forces will drive down median income by about 0.5 percent per year over the next two decades, according to an analysis by Burkhauser and Jeff Larrimore, Ph.D. ’10, a former member of Burkhauser’s research group now with the Joint Committee on Taxation of the U.S. Congress. Their report will be a chapter in a Russell Sage Foundation book, “Changing Times: America in a New Century,” to be published later this year.

Mathematically, a median is the number exactly in the middle of a list; the report focuses on the person with median income as representing the “average American.” If the average American has less money to spend, economic growth will be slowed.

Burkhauser and Larrimore drew on data from the Current Population Survey, in which the U.S. Census Bureau annually interviews a sample of 60,000 households nationwide. Cornell has access to confidential census data through the Cornell Institute for Social and Economic Research. They employed “shift-share” analysis, which shows how a particular group contributes to a change in the overall numbers.

The most important contribution to declining income over the past decade, and particularly during the Great Recession and its aftermath, was the large number of unemployed men, they found. But looking ahead, they predicted that over the next two decades demographic shifts will be an important factor pulling the median down.

In the 1990s and 2000s the Baby Boom generation, maturing into their peak earning years, helped to boost the median income. But as they retire over the next two decades their household incomes will fall sharply.

According to the U.S. Census Bureau the Hispanic population will increase from 16 to almost 22 percent of the U.S. population by 2030 and almost 28 percent by 2050. The black population will increase more modestly from around 13 percent to 14 percent by 2050. Since minority mean household incomes are only 60 percent of those of white households, this will reduce median income growth by an additional 0.34 percentage points per year through 2020 and by 0.35 percentage points per year between 2020 and 2030, the report said.

Noting that “demography is not destiny,” the report urges action to improve the education of ethnic minorities to enable them to move into better-paying jobs, and incentives for older workers to delay retirement or measures to increase retirement income, such as higher Social Security benefits.

In previous business cycles, the report showed, the increasing employment and growing earnings of women helped to raise median household income, but “Women aren’t going to bail us out this time,” Burkhauser said, because their employment levels plateaued in the early 2000s.

Demographic trends produced a small headwind against median income growth in previous business cycles, the report noted. As the makeup of the population changes, it said, “This mild headwind is likely to become a gale.”