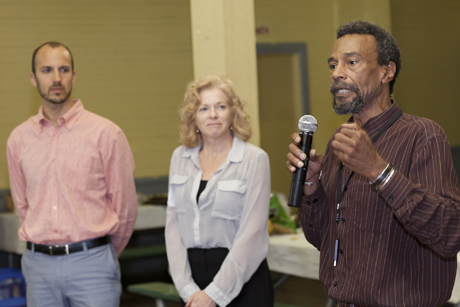 Robert Barker/University Photography
From left, Dan Roth and Maria Cimilluca present the 2013 Cornell University Partners in Sustainability Award to Kirby Edmonds, who accepted the award on behalf of the Building Bridges Initiative, Aug. 1.

The 2013 Cornell University Partners in Sustainability Award (CUPSA) has been given to the Building Bridges Initiative.

“This year’s award recognizes the work of Building Bridges to bring local sustainability and social justice efforts together, and the importance of equity in both economic development and environmental sustainability,” says Dan Roth, director of Campus Sustainability.

The CUPSA regional award, he said, is intended to raise the visibility of local and regional partners in Cornell’s work in sustainability.

Kirby Edmonds, Dorothy Cotton Institute senior fellow and program coordinator, accepted the award Aug. 1 on behalf of the Building Bridges Initiative from Maria Cimilluca, senior director for Facilities Management and member of the President’s Sustainable Campus Committee. The award was presented at a program of the Understand 2 Overcome initiative, where many community leaders and active community members were in attendance.

The Building Bridges Initiative was established in 2011 to “strengthen relationships, develop a shared vision and identify ways to build bridges between local sustainability and social justice efforts that will result in a socially just, resilient regional economy that preserves and maintains our natural environment,” according to its website. Since its establishment, Roth noted that Building Bridges has:

The initiative, says its website, focuses on “equity” as the driver of economic development and ecological sustainability, and prioritizes jobs for low-income people in the city and in rural towns. Its ultimate goals are to eliminate structural poverty and racism, create a local economy that works for everyone and protect the ecosystems that sustain the region.

This is Cornell’s fourth year giving a sustainability award to community and regional partners.