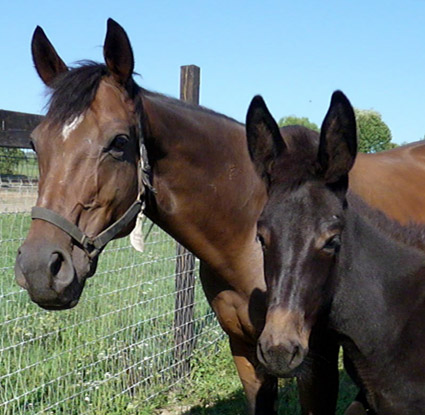 Though placentas support the fetus and mother, it turns out that the organ grows according to blueprints from dad, says new Cornell research. The study, published in the Proceedings of the National Academy of Sciences in June, shows that the genes in a fetus that come from the father dominate in building the fetal side of the placenta.

Genes work in pairs: one from each parent. But about 1 percent of mammalian genes choose sides, a phenomenon called genomic imprinting. Imprinted genes use molecules that bind to DNA (epigenetic tags) to quiet one half and let the other lead. In the study, the researchers discovered 78 new imprinted genes using horse-donkey hybrids.

“This is the first study to offer an unbiased profile of novel imprinted genes in a mammal other than mice,” said lead author Xu Wang, a postdoctoral associate in the laboratory of Andrew Clark, professor of molecular biology and genetics and the study’s senior author.

Using mouse studies, only about 100 genes with imprinted expression had been identified. To determine whether other genes exhibit imprinted expression, Wang and colleagues sequenced all of the expressed genes (the transcriptome) of hinnies (whose mothers are donkeys; fathers horses) and mules (whose mothers are horses; fathers donkeys) and looked for parent-of-origin differences.

Because the genomes of horses and donkeys differ by approximately one in every 200 base pairs (differences called single nucleotide polymorphisms or SNPs), the paternal versus maternal contributions in their offspring can be genetically tracked. Using SNPs, the authors were able to identify the parent-of-origin for 7,000 genes.

Of those genes, transcriptome data from placental tissue revealed that 93 genes were imprinted. While only 15 of the 40 known imprinted human genes were identified in this set, their expression bias was identical to that of humans, indicating a highly conserved function for these genes between the horse family and humans.

“[The other 78 candidates] were partially imprinted, not 100 percent,” indicating a highly dynamic process, said Wang.

“Genomic imprinting in the placenta may be an adaptive mechanism [that promotes functional] plasticity in response to changing environmental conditions during gestation,” according to the study.

Strikingly, a majority of the imprinted candidates were paternally expressed, and this expression bias was lost when the transcriptomes of fetal tissues were examined. At the same time, as in mice, paternally imprinted genes heavily regulate placental development in these animals.

“Mouse experiments showed that if all DNA comes from the mother, the embryo grows quite well, but not the placenta, suggesting some degree of sex-based division of labor between programming the placenta and the embryo,” said Wang. “Our results confirm what these past findings suggested.”

The methods used in the study may also help breeders.

“This discovery explains what breeders call the maternal grandsire effect,” said co-senior author Doug Antczak, equine geneticist at Cornell’s College of Veterinary Medicine. “Some genes, like so-called speed genes in great racehorses, skip a generation and only express in grandchildren if their carrier was a certain sex. For example, most foals of history’s best racehorse, Secretariat, raced poorly. So did his sons’ offspring. But many of his daughters’ foals were outstanding racehorses. We’ve developed a new approach that can identify imprinted genes that may be linked to racehorse traits and which could help breeders’ decision-making.”

Carly Hodes '10, MBA '15, is a communications specialist at the College of Veterinary Medicine; Luda Shtessel is a postdoctoral associate in Cornell's Department of Molecular Biology and Genetics.