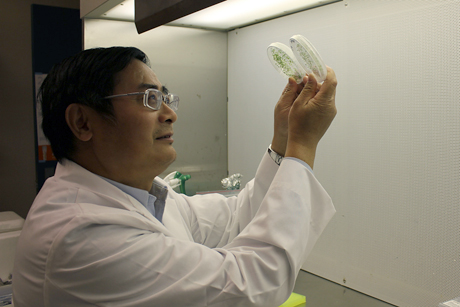 What plant scientists call senescence, consumers experience as wilted produce and overripe fruit. A team led by Cornell horticulture professor Su-Sheng Gan has identified an enzymatic fountain of youth that slows the process of leaf death, a discovery that lays the foundation for the genetics of freshness.

In a series of experiments using the plant Arabidopsis thaliana, Gan and colleagues discovered a key regulator – S3H – that acts as a brake on the process of leaf death. When its levels are low, leaves senesce early; when it is present in high levels, it results in longer leaf longevity.

The study was published in the Aug. 19 issue of Proceedings of the National Academy of Sciences, with former Cornell postdoctoral associate Kewei Zhang (now at Brookhaven National Laboratory) as first author.

“It was serendipity – we weren’t actually looking for this gene, but it turned up in an earlier survey of genes involved in leaf senesce,” Gan said. “When we characterized it, we found more than we were looking for: a key step in the plant’s pathway for controlling senescence that had been eluding scientists.”

At the start of that pathway is salicylic acid, precursor of the active ingredient in aspirin, which is used by plants as a hormone to trigger development and to fire up a response to a pathogen attack. The gene product they discovered breaks down salicylic acid, effectively silencing the molecular command to die. In addition to affecting the timing of leaf death, it also affects its rate: While normal plants take more than nine days for a leaf to progress from living green to yellow, plants without the gene yellowed in fewer than three days.

The study provides insight into a highly regulated process with many molecular steps. According to Gan, plant senescence is estimated to involve 10 percent of genes in the genome. Plants use an expedited ‘hypersensitive’ process to thwart pathogens by sacrificing infected cells to protect the surrounding healthy tissues. The slower version of the cell-dying process is what lights up hillsides in autumn: botanical recycling that ensures the nutrients and proteins in the leaves have been stowed for use in next spring’s flowers, seeds and leaves.

“What we have found is the convergence point between the slow and fast death systems,” Gan said. “When the plant starts to accumulate salicylic acid, it turns on S3H, which then acts as a brake on the process by breaking down the salicylic acid, giving the plant enough time to recycle all the reusable parts.”

In the current study, the increase in leaf longevity was significant but was tallied in days; Gan expects further research to enable the delay of senescence for weeks. In our transport and storage-based food system, senescence after harvest whittles away at fruit and vegetable quality. Gan envisions applications that will produce leafy greens that stay fresh in the fridge, flower bouquets that last longer, and crops that keep their nutrients with an extended shelf life and less post-harvest loss.

“Much of the progress plant breeders have made in improving plant yields is actually due to delaying leaf senescence,” Gan said. “You need long-lived green tissue to support the production of fruits, vegetables and seeds, so senescence limits the yield of many crops.”

His lab group is already working with other genes in the salicylic acid pathway – including a master regulator gene – with promising results. When they switched the gene off using molecular tools, soybean yields were increased by up to 44 percent.