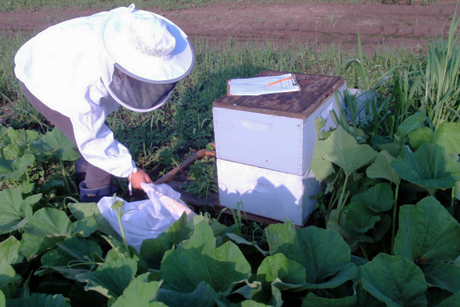 Jessica Petersen
Alexandra Gresov '14 collects bees from a hive placed in a pumpkin patch to determine pollination patterns, as part of a research project she conducted at the New York State Agricultural Experiment Station this summer.

It’s a question that has perplexed pumpkin producers for years: Why aren’t patches supplemented with beehives to aid pollination producing more pumpkins?

Aspiring Cornell entomologist Alexandra Gresov ’14 may have found the answer, after spending her summer catching hundreds of bees on their way back to their hives and determining their foraging fidelity by examining the pollen they had collected.

She discovered the bees were commuting outside the pumpkin patch for pollen; in fact, quantities of pumpkin pollen were actually lower than any other pollen type for both honeybees and bumblebees. Corn was most common on honeybees, and pea-type plants (such as beans, clover and trefoil) were most common on the bumblebees.

Gresov, a biology major and president of the Cornell Beekeeping Club who worked with entomology professor Brian Nault and postdoctoral research associate Jessica Petersen, managed to get stung only three times. She said the project is just the first step in figuring out what drives pollination behavior and what is trumping proximity. 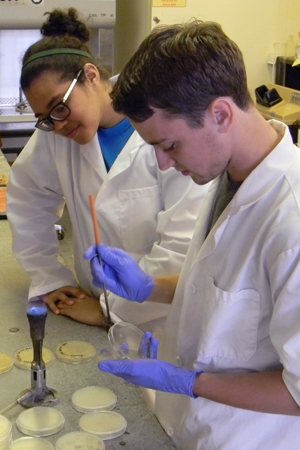 She was one of 28 students selected from top universities around the country to participate in the summer scholars program at Cornell’s New York State Agricultural Experiment Station in Geneva (NYSAES). Other students investigated topics in the fields of entomology, food science, horticulture and plant pathology/plant microbe biology.

Before starting his project, Penn State food science major Kenneth Vogel had never tried tempeh, a fermented soybean product common in Indonesian cuisine. After a summer of experiments, he prefers tempeh on plates of media in the lab than on a dinner plate, but he’s hooked on research in microbial food safety.

“In 2012 there was an outbreak of foodborne illness traced back to Salmonella contamination of the tempeh starter in North Carolina,” Vogel said. “In traditional production, the rehydrating soybeans are acidified by lactic acid bacteria which deter pathogens. For commercial production in the United States, the parameters for safe processing haven’t been worked out.”

Vogel, working in the lab of Cornell food science professor Randy Worobo, added two food-friendly acids – lactic and acetic – at different levels to mimic food processing options on a micro scale. Samples of the soybean fermentation were examined every 12 hours to evaluate their effects on levels of the human bacterial pathogen Bacillus cereus and the fermentation workhorse Rhizopus oligosporus, a fungus. The next step will be testing the protocols against Salmonella.

“There were a lot of experimental hurdles, but it was a blast,” said Vogel.

What’s not to like about hummus, the chickpea spread growing in popularity as a protein-rich snack? According to summer scholar Sara Spoede, a food science undergraduate at the University of Missouri-Columbia, its Achilles heel is its need for refrigeration and its short shelf life.

“There are really two options for making a shelf-stable hummus: adding acid to prevent the growth of bacteria and heat-treating it to sterilize it,” Spoede explained. “But compared to other products, hummus is a challenge for acidification and heat treatment because it is so viscous.”

In the lab of Olga Padilla-Zakour, Cornell associate professor of food science, Spoede experimented with varying the amounts of the main ingredients in hummus – water, oil, cooked chickpeas and sesame paste (tahini) – and processing temperatures of 77 F and 176 F. Each batch was then evaluated for its texture and thickness.

She came up with a promising mix, which will be further investigated by a Cornell graduate student, with the aim of finalizing a protocol that will be appropriate for small-scale hummus producers.