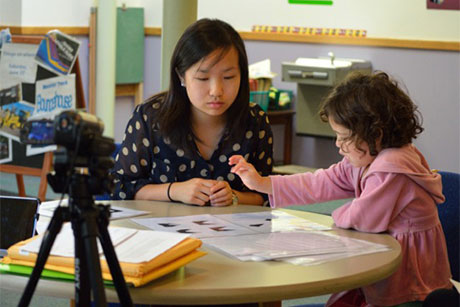 Human development major Wendy Wei ’15 spent most of her summer at Ithaca-area day care centers leading 4- and 5-year-olds through brain teasers and puzzles or building towers with blocks and Legos. Far from child’s play, her work sought to understand how preschoolers develop spatial cognition and whether those abilities could be nurtured through interactive play.

Wei is one of 15 undergraduates who received $4,000 stipends from the College of Human Ecology to work in faculty labs full time this summer as part of the college’s long-running research immersion program. Made possible by a mix of alumni endowments and college and federal funds, it allows students to conduct research uninterrupted by classes, exams, jobs or extracurricular activities.

“We want students to deeply engage in research, not just doing a few hours as an assistant in the lab but helping the team to define the research question, methods and data collection and interpretation,” said Carole Bisogni ’70, M.S. ’72, Ph.D. ’76, associate dean for academic affairs. “For some students, it changes their entire outlook.”

Wei entered Cornell on a path to become a physician. But, partly due to her research in associate professor Marianella Casasola’s Cornell Infant Studies Laboratory, she’s now focused on a career in research and education.

This summer, Wei led an experiment to test how children’s knowledge of spatial language (terms like “up,” “down,” “in” and “on”) influences their spatial cognition (how well they recognize two-dimensional shapes and patterns, and mentally map their physical surroundings).

“Prior work has shown a link between spatial cognition and future performance in science, technology, engineering and mathematics fields,” Wei said. “Hopefully the study will help in coming up with better methods for teaching kids spatial concepts.”

While Wei focused on cognitive growth, Judith Mildner ’14, human development, was examining declines in brain function. Mildner helped conduct a study in the Cornell MRI Facility searching for biomarkers in the brain that might predict the onset of Alzheimer’s and other neurodegenerative diseases years ahead of what is now possible.

Mildner said she enjoyed working on a team of research assistants and the close interaction with faculty that’s rarely possible during the busy academic year.

“I want to work in neuropsychology research, probably on aging and dementia, and I have learned a lot about what it takes to run an functional MRI study [a type of imaging that allows neuroscientists to see different forms of brain activity],” she said. “I want a job doing research, and this summer I’ve been able to do it all day, every day.” 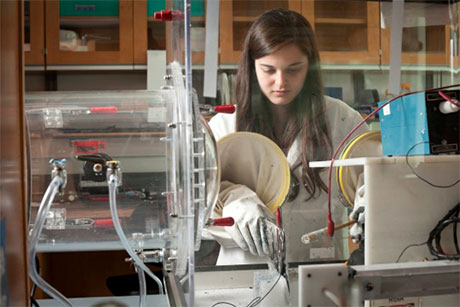 Some, like Nivetha Subramanian ’15 and Ariana Levitt ’15, donned white coats at lab benches: Subramanian compared genetic properties of breast milk from mothers of full-term and premature infants, and Levitt looked for the right mix of polymers needed to spin nanofibers with high conductivity and low water solubility. Others contributed to social science projects: Williams “Carlos” Higgins ’14 surveyed occupants of Caldwell Hall to gather data for a project to identify structures best suited for energy-saving retrofits, and Max Kellogg ’15 built a statistical model to track how TV ads influence people’s daily consumption of sweetened and unsweetened drinks.

Higgins said the summer program builds on classes by allowing him to “dive in much deeper.”

“It’s exciting when I find something I don’t expect to,” he said. “Usually in class everything is laid out in the syllabus, and you know what’s coming. With research, I’ve thought about the problem for hundreds of hours and still get results totally different from what I expected.”