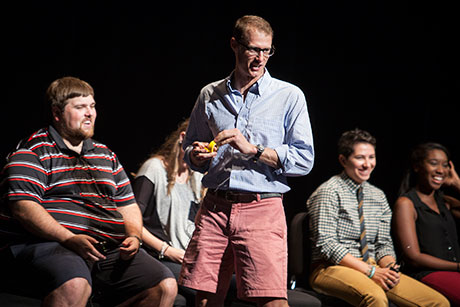 LInday France/University Photography
The cast of "Speak About It" rehearses the program.

In the midst of finding their way around campus, meeting new people and attending Orientation Week events, some 3,800 first-year and transfer students were asked to think seriously about healthy sexual relationships, consent, sexual assault and prevention, and bystander intervention.

They were required to attend “Speak About It,” a new educational performance based on students’ life experiences around relationships, sex and alcohol. The program was recommended by a committee of students and staff following a series of sexual assaults and harassment incidents last fall.

The program is presented by five actors with extensive training in sexual assault awareness and prevention who use skits, monologues and educational dialogue to demonstrate the characteristics of healthy relationships and convey perspectives as varied as waiting to have sex until marriage, experimenting with one’s own sexuality and having a long-term, monogamous relationship.

Personal stories submitted by actual college students are performed as monologues, presenting perspectives from survivors of sexual assault, friends and partners of survivors, and a woman who shares her story of healing. The program also includes skits that define consent, show ways to ask for consent and illustrate effective bystander intervention techniques.

“This program for incoming students is just one step in a multifaceted effort to address and eliminate sexual misconduct, including violence and assault, on our campus.” said Susan Murphy, vice president for student and academic services and chair of the Executive Committee on Campus Climate, Health and Safety.

In addition to offering the “Speak About It” program, Cornell has revised its processes for reporting bias and other incidents of harassment, extended Blue Light Escort service hours, instituted a Blue Light weekly safety email from Chief of Police Kathy Zoner and developed a new SHARE (Sexual Harassment and Assault Response and Education) website that coordinates all Cornell resources on these topics.

“We are working to educate our community about all aspects of bias, sexual misconduct and violence, addressing the campus culture as a whole to foster a respectful, safe, inclusive and engaged academic environment,” said Murphy.

“Orientation is a great time to share the values of the institution, introducing new students to the Cornell community and the resources available here,” said Sarah Jones, assistant dean of students. “But shaping the culture of an organization goes beyond orientation, involving awareness-building and education throughout a student’s life at Cornell.”

“Speak About It” was originally written at Bowdoin College and has been operating independently since 2010. “Speak About It” now offers tailored performances for specific institutions and has been performed at dozens of colleges and universities across the country. “Our goal is to have a conversation about having a conversation about sex, and to leave students feeling educated, entertained and empowered to create change on their campus,” said Shana Natelson, program producer.

“Speak About It” was piloted at Cornell to new students last January. The President’s Council of Cornell Women awarded a grant to fund this fall’s program. Feedback from the program this fall will help inform future program offerings.