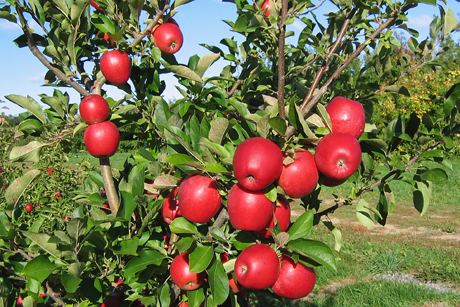 Kevin Maloney
SnapDragon, above, and RubyFrost have been a decade in the making, and how they’ve gone to market is a first for the Cornell apple-breeding program and the New York apple industry.

GENEVA, N.Y. — Cornell has announced two new apple varieties developed in partnership with the New York Apple Growers (NYAG). They are SnapDragon and RubyFrost, and they have undergone a year of rigorous consumer testing as NY1 and NY2.

The new names were revealed Aug. 1 by Jeff Crist, vice chairman of the NYAG board of directors, at a field day at the New York State Agricultural Experiment Station, where Cornell breeder Susan Brown developed the varieties.

“SnapDragon is a great name for this apple because consumers found its crispy texture and sweet flavor so appealing,” said Mark Russell, an apple grower and NYAG member. He anticipates it will be a popular apple for snacking, especially for children.

SnapDragon gets its juicy crispness from its Honeycrisp parent, and it has a spicy-sweet flavor that was a big hit with taste testers. Brown recognized its promise and fast-tracked it for commercialization. 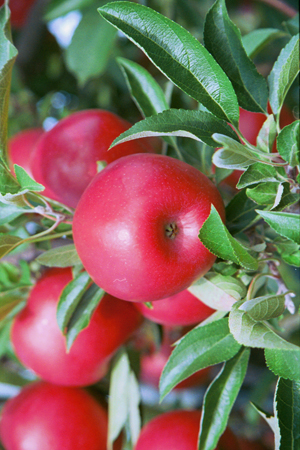 Susan Brown
RubyFrost, which ripens later in the fall and stores well, can be compared to Empire and Granny Smith. 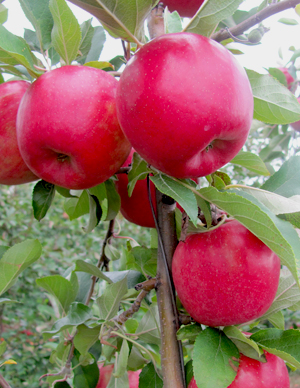 Kevin Maloney
SnapDragon gets its juicy crispness from its Honeycrisp parent, and it has a spicy-sweet flavor and a long shelf life.

“I remember my very first bite of SnapDragon. The taste, the crispness and the juiciness impressed us,” said Brown. “Retailers will appreciate its other qualities as well, because although SnapDragon’s harvest window starts relatively early – in late September – its long storage and shelf life means retailers may be able to offer it with consistent quality for a longer time than Honeycrisp.”

RubyFrost, which ripens later in the fall and stores well, will provide a boost of vitamin C well into winter. Brown expects it will be popular with fans of Empire and Granny Smith.

“I think juicy and refreshing when I eat a RubyFrost,” Russell said. “It’s a fascinating apple, with a beautiful skin and a nice sugar-acid balance, but to me the crisp juiciness is rewarding every time. I don’t know how to express the idea of juice in a name, but ‘frost’ captures its refreshing quality.”

The two varieties have been a decade in the making, and how they’ve gone to market is a first for the Cornell apple-breeding program and the New York apple industry. Historically, public universities developed new apple breeds and released them to the industry freely. But in 1980, the Bayh-Dole Act gave universities the right to retain the intellectual property rights for their research, with limited plant-based royalties.

In May 2010, Cornell forged a partnership for a “managed release” with NYAG, a new industry group, to establish an exclusive licensing agreement in North America for the two apple varieties. Growers pay royalties on trees purchased, acreage planted and fruit produced, and the income is used to market the new varieties and support Cornell’s apple-breeding program.

The first trees were planted in farmers’ orchards in 2011, and now 400 acres are growing across the state. According to NYAG, the still-young trees will produce a limited crop this year, but intrepid consumers can search out SnapDragon and RubyFrost at select NYAG farm stands across the state. By 2015, the varieties will be vying for space in grocery stores among the Empires, Galas and Honeycrisps.

Greater quality, better storage, and disease and insect resistance have long been the goals of Cornell’s apple breeding program. In addition to SnapDragon and RubyFrost, Cornell has released 66 apple varieties since the late 1890s, including the popular Cortland, Macoun, Empire and Jonagold.