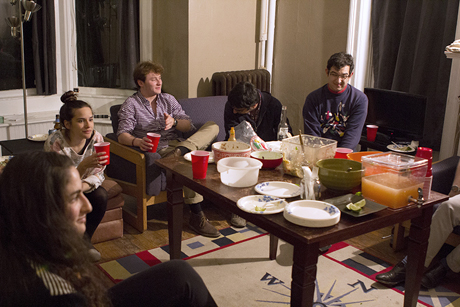 Guests attending Jeremy Handrup’s dinner party in May weren’t aware that Handrup ’13 was taking his role as “host” literally. The party was actually part of his final project for Parasites! The Art and Media of Imposition, a class offered by the Department of Performing and Media Arts.

The Greek word for parasite (parasitos) refers to someone who eats at the expense of another. It only later came into use as an epithet for someone said to take without giving back, like the perpetual dinner guest who never returns the invitation.

Handrup’s party reworked this colloquial sense of the host-parasite relationship: Although he gave his partygoers free food and drinks, he required them to bring along a piece of original artwork as a gift.

“I think of the parasite-host relationship as not so black-and-white – not that the host always gives and the parasite always takes, but that they both participate in the taking and the giving,” Handrup said.

The class, led by Anna Watkins Fisher, a Mellon postdoctoral fellow, explored the social, ethical and cultural dimensions of parasitism in contemporary life, both as a staple in popular political discourse and as a positive figure in contemporary performance, art and media.

“The course asked students to rethink the current political meaning of parasitism – when certain groups are considered ‘takers’ and others ‘makers,’” Fisher said. The 2012 presidential election, as well as recent discussions about illegal aliens and welfare recipients, are examples of the attention given to the notion of parasitism today.

Through readings of popular and experimental art and media, students explored the idea that the parasite – far from being an unproductive or superfluous figure – has potential to help us think about how our perceptions of value (for example, whose work “counts” and whose doesn’t) are constructed.

For the course’s final project, students were required to make a parasitical art or media project.

Erin Ferro-Murray
The Stewart Avenue arch on which Ferro-Murray made passersby unwitting participants in an Apple advertisement.

Art major Erin Ferro-Murray ’13 chose to create a parasitical obstacle, an archway on a sidewalk on Stewart Avenue through which people ran or walked. He placed a green screen (which allows other images to be projected onto it) on the arch, then filmed while people approached and interacted with it.

As seen in the video below, Ferro-Murray projected advertising for Apple computer products onto his sculpture. Passersby believed they were simply going through the obstacle, but they were actually taking part in a commercial for Apple.

“Both Jeremy and Erin chose to pursue final projects that demonstrated a more nuanced picture of parasitism,” Fisher said. “Rather than making his sculpture a total obstruction, Erin’s project staged an ambiguous relationship to its environment.” Likewise, Handrup decided to leave the future use of the artwork he received (whether it would be sold or kept) an open question, Fisher said.