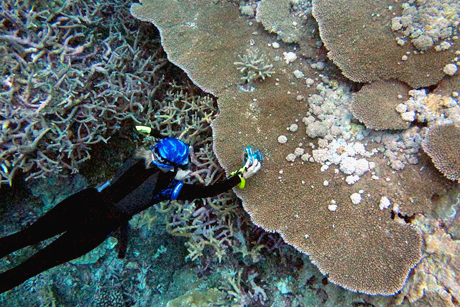 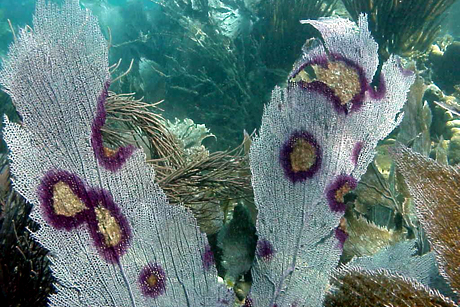 Climate changes have increased the occurrence of infectious diseases in some natural and agricultural systems, and developing predictive early-warning systems will be crucial to combat their spread. A review article in the Aug. 2 issue of Science presents the current state of the science and forecasting recommendations.

In the paper, Drew Harvell, Cornell professor of ecology and evolutionary biology, offered evidence of marine infectious diseases in coral, abalone and oysters, for example, and cases of forecasting and mitigation for those diseases.

In gorgonian corals, also known as sea fans, warmer temperatures increase defenses, but also lead to faster replication for coral pathogens and changes in associated bacteria. The sea fan system has become a model system for Harvell’s work to link changes in coral immunity to climate events. Disease outbreaks have coincided with warmer sea temperatures in the Caribbean, and warming has led to the emergence of new pathogens that have greatly reduced coral populations and led to ecosystem-wide repercussions, according to the paper.

Such once-dominant species as herbivorous abalone in California waters have been “knocked back to near extinction” due to warming-driven rickettsial disease, which has led to shifts across the food chain in California, Harvell said.

In another example, protist infections of seagrass have correlated with warming, leading to degraded nursery habitats for fish and migratory waterfowl and the extinction of the eelgrass limpet, according to the review. Work is also underway in the Harvell lab to study seagrass declines in the Pacific Northwest.

“Diseases are notoriously difficult to manage, particularly in the ocean, so trying to get ahead of them with forecasting is important for developing management strategies,” said Harvell. “Disease outbreaks are like lightning strikes: By the time you implement sampling, it can be over, so advance warnings are vital.”

Marine climate resilience programs rely on the National Oceanic and Atmospheric Administration’s coral bleaching forecasting programs and are leading to the development of coral disease predictive algorithms. With the help of forecasting, when outbreaks occur, marine managers close reefs to humans to reduce disease transmission and stress, cull parts of diseased colonies and increase surveillance. And to make marine ecosystems more resilient to disease, efforts include developing no-fishing zones and reducing land-based pollution that can introduce new pathogens, the article reports.

Documenting climate and marine disease links in the Science analysis was made possible by previous work done by Harvell, Cornell postdoctoral researcher Colleen Burge, and an international team through a Research Coordination Network (RCN) grant published in June in the Annual Review of Marine Science on climate change drivers of marine infectious diseases.

Such research is important because some of the biggest insights into diseases sensitive to climate changes come from marine systems.

That’s partly because corals, oysters and abalones, for example, are cold-blooded, making them sensitive to temperature changes caused by warming climate, and disease in these sessile organisms is easier to detect, Harvell said. It is much harder to identify climate-linked disease outbreaks in warm-blooded creatures that regulate their own temperature, or when organisms are highly mobile, as with fish and land animals.

Anticipating and monitoring human diseases pose the biggest challenges. For example, while climate facilitates the spread of mosquito vectors in warmer conditions in a disease like malaria, forecasting and tracking is offset by socioeconomics and human management of mosquitoes. Better forecasting and prevention of such diseases will require long-term ecological studies of pathogens, vectors and hosts and their past distributions, and new computer models that integrate dynamics of climate with epidemiology, ecology and physiology.

Sonia Altizer, an ecologist at the University of Georgia, was lead author of the Science paper. The study was funded by the National Science Foundation.

An award from Cornell’s Atkinson Center for a Sustainable Future led to initial work that facilitated the RCN grant.