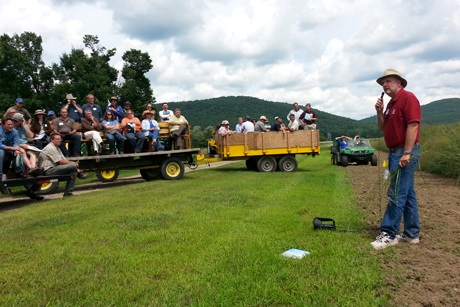 Paul Salon ’77, Ph.D. ’95, of the USDA’s Natural Resources Conservation Service organized the field day and delivered an overview of the research projects at the Big Flats Plant Materials Center.

Like Rumpelstiltskin, the fictional Brothers Grimm character who spun straw into gold, New York has the potential to grow biomass grasses in three seasons – and to bring that biomass to New York’s energy market.

Under the federal Energy Independence and Security Act of 2007, the United States must increase the volume of renewable fuel – chiefly ethanol – to be blended into transportation fuel from 9 billion gallons in 2008 to 36 billion gallons by 2022, of which 21 billion gallons will be non-corn, cellulosic ethanol. By separating the woody parts and pulp from the cellulose parts of biomass plants, ethanol can be derived from the plants’ sugars.

Eric Fabio, Cornell graduate student in the fields of horticulture, noted, for example, that 1 acre of marginal land in New York could yield about 6 tons of biomass, or about 600 gallons of cellulosic ethanol, annually.

Senior research associate Julie Hansen, from plant breeding and genetics, described the testing used for seasonal grasses for New York growers, saying that cool season perennial grasses can be used with higher levels of management, and the warm season grasses have a lower need for inputs.

Alan Taylor, professor of horticulture in Geneva, and Ryan Crawford, technician in plant breeding, explained seeding rates and seed treatments to alleviate pathogenic pressures and to optimal plant stands. Taylor explained, for example, that his lab is developing a “granola” mix of seeds – from different grass and other seeds that could be sown with a conventional planter to establish a polyculture.

Gary Bergstrom, professor of plant pathology, focused on the biology and management of the pathogen switchgrass smut. “With mature stands, we are seeing more disease intensity,” said Bergstrom. “Smut is a fungus disease [Tilletia maclaganii] that greatly stunts grass plants, and this has been on our radar for a few years now. A small percentage of seedling plants becomes infected by spores that contaminate switchgrass seed, but, over years, the infection spreads to other plants – making it hard to eradicate.”

With infestations of smut in parts of New York, Pennsylvania and much of the Midwest, Bergstrom said, “It’s back to the drawing board to understand this pathogen.”