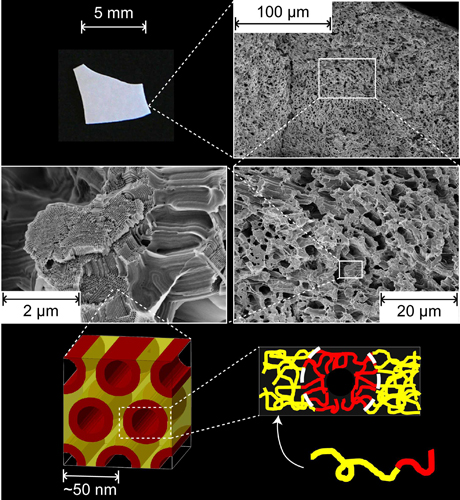 Forming perfect porous polymer films is not enough; they need both large and small pores, and the process of making them needs to be simple, versatile and repeatable. Creatively combining already established techniques, Cornell materials researchers have devised a so-called hierarchical porous polymer film synthesis method that may help make these materials useful for applications ranging from catalysis to bioengineering.

The research team was led by Ulrich Wiesner, the Spencer T. Olin Professor of Engineering, and the experiments were completed by graduate student Hiroaki Sai, first author on a paper reporting the results online in the journal Science, Aug. 2. The research collaboration drew on the expertise of other Cornell scientists in materials growth and characterization.

The hierarchically structured polymers are porous at both micron- and nano-length scales. This provides both high flux, which means materials can flow through it efficiently, as well as high surface area – both important, for example, in rapid catalytic conversions. The materials were self-assembled from a series of block copolymers, which are large molecules comprising “blocks” of repeating units.

Researchers have made such porous materials before, Wiesner said, but the methods usually involve post-processing; for example, once the polymer is made, the pores need to be etched into the material. 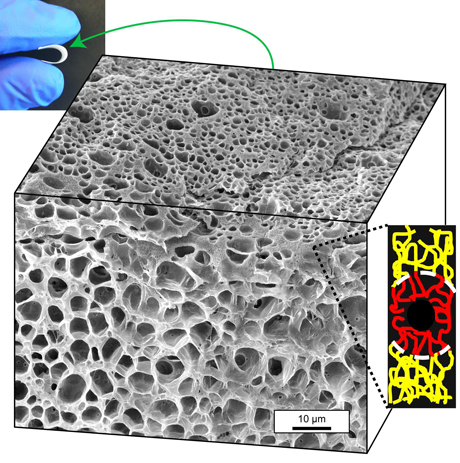 With their new method, the researchers achieved dual porosity by evaporating a solvent from a mixture of a block copolymer with a small molecule additive that is chemically similar to one of the blocks. The two components form two coexisting phases, like water and oil, with a continuous interface between them separated by tens of microns. This method of phase separation is known as spinodal decomposition.

One of the two phases rich in the block copolymer then phase-separates on the tens of nanometers scale into two domains formed by the two blocks of the copolymer. One of the blocks, a polyethylene oxide (PEO) block, is swollen with the small molecule additive, which is immiscible – doesn’t mix – with the other block of the polymer.

When the additive was washed away, e.g., with water, what remained was a continuous pattern of porosities on two lengths scales – tens of microns, and tens of nanometers.

“It’s about as simple as it gets,” Wiesner said. The researchers tried the method with multiple diblock and even triblock polymers, and contend that the method can be generalized for making many versions of this highly sought-after material. What’s more, they were able to easily tune the nanostructure of the resulting polymer by adjusting the temperature at which the original organic solvent was evaporated.

Once made, the material had to be tested for utility. Lara Estroff, associate professor of materials science and engineering, and her student Emily Asenath-Smith helped the scientists grow calcite crystals on the porous polymers. Electron microscopy confirmed that the calcite infiltrated the entire structure, small and large pores, thus demonstrating transport of calcite precursors through the porous structure.

Researchers including David Muller, professor of applied and engineering physics and co-director of the Kavli Institute at Cornell for Nanoscale Science, and his student Robert Hovden contributed tomography to characterize the nanoporous structure of the polymers. The researchers also used nanoscale computer tomography to quantify the network of micron-sized pores connected throughout the samples.

The research was supported by the National Science Foundation through use of facilities at the Cornell Center for Materials Research.