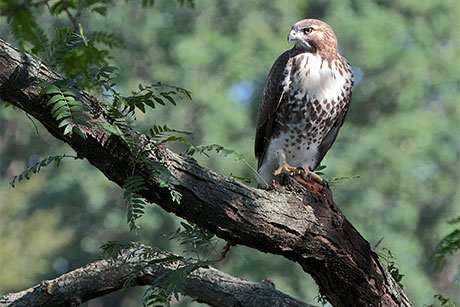 Christine Bogdanowicz
One of three red-tailed hawk offspring, D3, on East Ave. on Cornell's campus, Aug. 6. The photo marks one of the last verified sightings of the bird.

Over the last few weeks, two juvenile hawks have died on Cornell’s campus, leading to an outpouring of public interest.

A family of red-tailed hawks – Big Red and Ezra, and their three offspring who hatched in April – was made famous by a bird cam focused on a nest at the top of a light post near Weill Hall. The hawk cam has received 3.6 million unique viewers since it went live in March 2012.

Though there is no definitive proof that the two dead hawks belong to the family, the disappearance of two of the three juveniles – named D1, D2 and D3 – coincided with the discovery of two young hawks that suffered grave injuries.

One juvenile hawk, believed by some members of the public to be D3, was found dead near Bradfield Hall, not far from the nest site, on the morning of Aug. 9. A necropsy by the New York State Veterinary Diagnostic Laboratory at Cornell confirmed that the hawk died of blunt force trauma, likely from a collision that led to subsequent internal bleeding.

The other bird, anecdotally believed to be D1, was reported alive but injured near the intersection of Route 366 and Judd Falls Road that same morning. Staff from the Cornell Raptor Program found the bird and took it to the Janet L. Swanson Wildlife Health Center. The hawk was treated for extensive injuries to both legs, including tendon and nerve damage, severe abrasions and broken toes. On Tuesday, Aug. 13, veterinarians euthanized the hawk after determining that the injuries were too severe to enable recovery and quality of life.

Red-tailed hawks are widespread throughout North America. Veterinarians at the wildlife health center “have seen birds with all kinds of strange injuries, possibly due to their cosmopolitan distribution,” said Charles Eldermire, bird cams project leader at the Cornell Lab of Ornithology.

Staff members at the Lab of Ornithology are working with staff from Facilities Services to identify the most likely sources of hazards to hawks around campus and whether steps can be taken to minimize them, said Eldermire.

“They are just beautiful animals, and the view we are providing is intimate and immersive; you are right there next to them,” Eldermire said of the hawk cam and the swelling of public interest. “I think there’s an empathy that forms because the birds are doing the same things we are doing in our own lives: feeding, surviving, protecting ourselves against the elements. We are much more similar than different in some ways.”