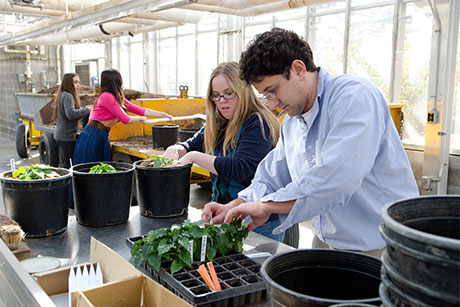 Gardeners in search of the perfect, pesticide-free pepper – that can be grown organically under local weather conditions – are unlikely to find seeds in a shop. But they may soon benefit from a participatory plant breeding and seed saving movement that is gaining momentum with help from Cornell scientists and alumni.

Plant breeder Mark Sorrells is leading a regional effort to breed new varieties of organic heritage wheat. Supported by nearly $200,000 from a three-year USDA Sustainable Agriculture Research and Extension grant, Sorrells – and partners at the University of Vermont, the University of Maine and the Organic Growers’ Research and Information-Sharing Network – will work closely with farmers in New York, Pennsylvania and New England to select and test promising lines of spelt, emmer and einkorn.

“Despite increased demand, the commercial sector is not offering organic growers an adequate choice of varieties,” Sorrells said.

What is available is often expensive or of questionable quality, he added.

Petra Page-Mann and Matthew Goldfarb, who worked for Cornell’s Small Farms Program, have answered the call through their new venture, Fruition Seeds. They lease land owned by Mark Adams ’68 in Naples, N.Y., to grow and process organic seeds from more than 60 crops, and collaborate with other farmers, including Nathaniel Thompson ’98, to further expand their offerings.

Home gardeners can get top tips straight from scientists at the Organic Farm and Garden Open House, Sept. 8 at the H.C. Thompson Vegetable Research Farm in Freeville, near Ithaca.

The event, from 1 to 4 p.m., will include demonstrations of how to clean and store seeds, ways to build healthy soils and minimize time spent weeding, as well as a mulch trial where visitors can see how the different options – plastic, biodegradable and organic matter – have fared in the weed-friendly weather. It will also feature tastings of new vegetable varieties and family activities including hay rides, raptor demonstrations and children’s activities. This year, the annual field day has been opened to home gardeners as well as farmers.

“We are surrounded by plants brilliantly adapting to their environment, constantly encoding resilience in their genetic diversity,” Goldfarb said. “Sustainable agriculture depends on our crops having the same opportunity.”

Michael Mazourek, the Calvin Noyes Keeney Assistant Professor of Plant Breeding, has traveled around the region over the past few years, giving primers about pollination and seed selection to farmers and backyard breeders at workshops organized in partnership with the Northeast Organic Farming Association and the Organic Seed Alliance.

One of his frequent stops is the Stone Barns educational center near Tarrytown, N.Y., where he works closely with farm manager Jack Algiere to test new varieties. Algiere also takes a hands-on role in creating his own varieties.

For many, the appeal of participatory breeding is that it’s personal. People can pick the traits they want, such as flavor, without the constraints of market pressures.

However, when tinkering with traits, there are only so many things you can do at a time. Powdery mildew resistance in squash requires two copies of a gene, for instance; the trade-off is a drop in yield, according to Mazourek.

“You have to be careful how you deploy genes. There can be too much of a good thing,” he said.

Breeding also requires patience. All the different permutations can become complex, and breeders may have to go through 100,000 plants to find something with all the right attributes, Mazourek said.

But the patience can pay off, by providing growers with opportunities to create something unique in the marketplace. It could also help save the planet.

“Often we don’t know the value of wild seeds until we have a problem. As the climate shifts, we can’t change the soil or the ecosystem – it is the seed that is the variable,” Mazourek said. “We need people who know how to make plants if we are going to adapt.”