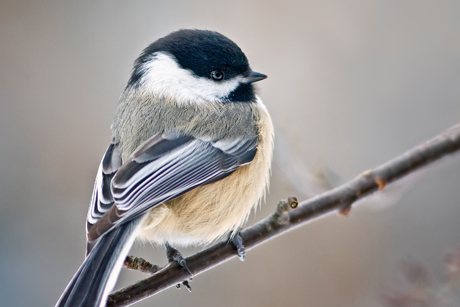 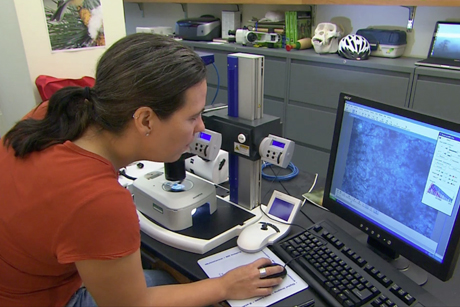 provided
For her doctoral thesis, Sara DeLeon conducted a study that found that even low levels of PCBs change bird songs. 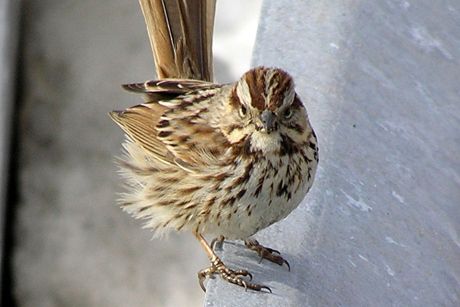 Aileen Barnes
Song sparrows were one of two species studied.

It may not kill them outright, but low-level PCB (polychlorinated biphenyls) contamination disrupts how some birds sing their songs, report Cornell researchers.

Their seven-year study is published in the September issue of the science journal PLOS ONE.

Before the chemicals were banned in the United States in 1979, PCBs were widely used in the manufacture of electrical devices, because they can withstand extremely high temperatures.

“PCBs are changing behavior in subtle but important ways that we’re only beginning to recognize,” says lead author Sara DeLeon, Ph.D. ’12, who did the research for her doctorate and is now a postdoctoral researcher at Drexel University.

“The black-capped chickadees and song sparrows we studied ingest PCBs when they eat contaminated insects. The chemicals appear to mimic hormones and interfere with development in the part of the bird’s brain that governs song and song structure,” she said.

The researchers found that song disruption is tied to specific types of PCBs; DeLeon tested 41 of the 209 variations of PCBs (differentiated by the positioning and number of chlorine atoms) to isolate their effects.

She collected and tested blood samples from males of the two species, recorded their songs over several field seasons and analyzed those songs using the RavenPro sound analysis software developed at the Cornell Lab of Ornithology. She tested birds along areas of the Hudson River that are known to be heavily polluted by PCBs, and at non-contaminated sites, including in Ithaca, the Adirondacks and just north of Albany. Tests at an Adirondack Mountains site eliminated mercury as a factor in song changes.

“The songs of black-capped chickadees and song sparrows are very well studied,” DeLeon says. “We found the greatest variation among birds in areas with higher levels of certain types of PCBs – their songs just were not coming out right. Since dominant males produce the most consistent songs, this variation could have important biological consequences.”

The researchers found that different types of PCB contaminants produce different effects. In analyzing the song sparrow’s trademark trill, DeLeon found that, at the most polluted sites, birds were singing “better” trills, with more high-quality strings of notes compared with the songs of sparrows in non-contaminated sites.

“Effects of PCBs are extremely complicated,” says senior author André Dhondt, director of Bird Population Studies at the Cornell Lab of Ornithology and the Edwin H. Morgens Professor of Ornithology. “What this demonstrates is that most previous PCB studies may not give us the whole picture because they did not look at the specific type of PCB involved but just measured overall levels.”

Study co-author Rayko Halitschke, a research associate in Cornell’s Department of Ecology and Evolutionary Biology, modified processes so that the birds would not have to be killed to detect the types of PCBs present, but could be sampled with just a small drop of blood.

The next logical step, Dhondt notes, would be to use this method to study low-level PCB effects elsewhere to learn how the pollutants are being spread through ecosystems and the effects they could be having.

“What Sara did was not easy,” Dhondt adds. “She found effects on the song and wanted to do more than just document that there was an effect, but to isolate what was causing it.”

Other co-authors include research associate Ralph S. Hames; assistant professor of ecology and evolutionary biology André Kessler; and Timothy DeVoogd, professor of psychology, all from Cornell.

The study was funded by Cornell, the Andrew W. Mellon Foundation, New York Sea Grant and the Kieckhefer Adirondack Fellowship Program. DeLeon was supported by a State University of New York fellowship; a Sloan Foundation fellowship and a Tibor T. Polgar Fellowship.