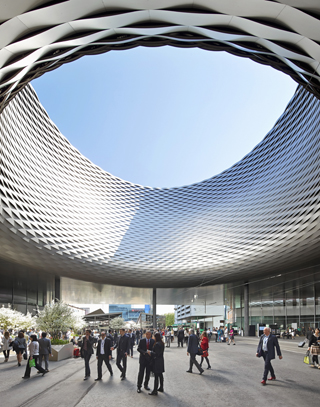 Herzog will give the symposium keynote, Sept. 10 at 5:30 p.m., and will take part in a public conversation with Eisenman, Sept. 11 at 2:30 p.m., moderated by Carson Chan, B.Arch. ’04. Both events will be held in Milstein Auditorium and are free and open to the public.

Herzog’s Basel, Switzerland-based firm Herzog & de Meuron is known for its international work, including the bird’s nest-shaped Beijing National Stadium built for the 2008 Olympic Games. Other projects include the Tate Modern in London, the Allianz Arena football stadium in Munich, the expansion of the Walker Art Center in Minneapolis and the Miami Art Museum. The collaborative practice won the 2001 Pritzker Prize, architecture’s highest honor.

Eisenman is an architect, educator and scholar who makes formal use of his knowledge of linguistics, philosophy and mathematics in his designs. His works range from the University of Phoenix Stadium and the City of Culture of Galicia in Santiago de Compostela, Spain, to the Memorial for the Murdered Jews of Europe in Berlin, which won multiple architectural awards.

He is the Charles Gwathmey Professor in Practice at Yale University, and served from 2008 to 2011 as a Frank H.T. Rhodes Class of 1956 Professor at Cornell.

The Preston H. Thomas Memorial Lecture Series was established in 1975 by Ruth and Leonard B. Thomas in memory of their son, Preston, an architecture student who died in an automobile accident.