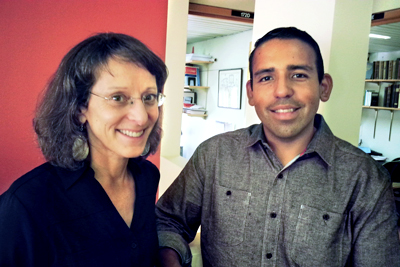 Down syndrome fetuses dramatically benefit when their mothers increase their intake of the nutrient choline during pregnancy and nursing, report Cornell researchers in the journal Neurobiology of Disease. Increased choline by moms bolsters brain functions and plays a profound health role for Down syndrome offspring throughout their lives.

While older pregnant women are generally tested for a Down syndrome fetus, younger women are not since their risk is low. However, development of all fetuses – Down syndrome or not – would benefit from choline supplements during pregnancy, said Barbara Strupp, Cornell professor of nutritional sciences and of psychology and the study’s senior author. Ramon Velazquez, a Cornell doctoral candidate in the field of psychology, is the first author.

When the researchers compared how Down syndrome mice performed in a water maze, they discovered that the ones whose mothers had choline supplements performed much better than those born to moms consuming lower choline levels.

At the cellular level, the researchers found that increased maternal choline bolstered neurogenesis – formation of new neurons – in a part of the brain called the hippocampus, a brain region important for spatial mapping and memory.  Importantly, hippocampal neurogenesis correlated with mouse performance in the water maze. This suggests that the increased neurogenesis may have contributed to the improved spatial cognition.

“Mounting evidence suggests that many women may not be consuming enough choline during pregnancy to promote optimal brain development and cognitive functioning of their babies – both normal and Down syndrome. Increasing choline intake during pregnancy is sound nutritional advice for all women and may offer an even more pronounced benefit for Down syndrome offspring,” Strupp said.

Demand for choline goes up dramatically during pregnancy, she explained. Choline is an essential nutrient for all individuals, but pregnant women have an even greater need due to the demands of the developing fetus.  The most concentrated sources of choline are foods such as eggs and meats, but choline is found in many other foods, including vegetables such as broccoli and cauliflower, Strupp said.

The study, “Maternal Choline Supplementation Improves Spatial Learning and Adult Hippocampal Neurogenesis in the Ts65Dn Mouse Model of Down Syndrome,” is published in the July issue of Neurobiology of Disease.

The National Institutes of Health funded this research.