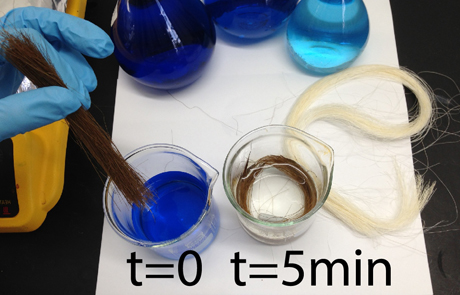 Dyes, such as indigo blue used to color blue jeans, threaten waterways near textile plants in South America, India and China. Such dyes are toxic, and they discolor the water, thereby reducing light to the water plants, which limits photosynthesis and lowers the oxygen in the water.

The study, published in the August issue of the journal Green Chemistry, describes a proof of principle, but the researchers are testing how effectively their method treats such endocrine-disrupting water pollutants as phenols, pesticides, antibiotics, hormones and phthalates.

“These molecules are contaminants that are very resilient to traditional water-purification processes, and we believe our biocomposite materials can be an option for their removal from waste water,” said study co-author, Marianny Combariza, a researcher at Colombia’s Universidad Industrial de Santander. 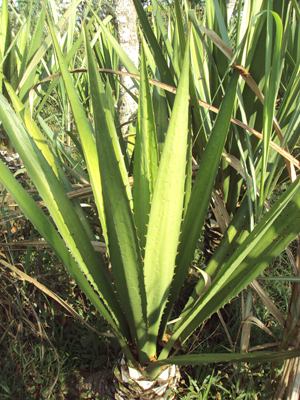 Provided
Local fibers, like those made from the native Colombian fique plants (Frucraea andina) pictured here, were processed and then used to degrade dyes in water.

The paper describes the method: Colombian fique plant fibers, commonly used to make coffee bags, are immersed in a solution of sodium permanganate and then treated with ultrasound; as a result, manganese oxide molecules grow in the tiny cellulose cavities. Manganese oxides in the fibers react with the dyes and break them down into non-colored forms.

“No expensive or particular starting materials are needed to synthesize the biocomposite,” said Combariza. “The synthesis can be performed in a basic chemistry lab.”

“This is the first evidence of the effectiveness of this simple technique,” said Hinestroza. “It uses water-based chemistry, and it is easily transferable to real-world situations.”

The researchers are testing their process on other types of pollutants, other fibers and composite materials. “We are working now on developing a low-cost filtering unit prototype to treat polluted waters,” said Combariza. “We are not only focused on manganese oxides, we also work on a variety of materials based on transition metal oxides that show exceptional degradation activity.”

Doctoral candidate Martha Chacón-Patiño is the paper’s lead author, and chemistry professor Cristian Blanco-Tirado is a co-author, both at Universidad Industrial de Santander.