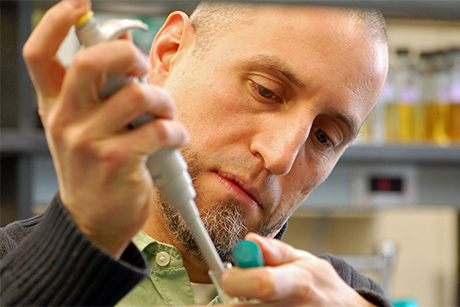 Kathryn Coldren
Joe Peters, associate professor of microbiology, is a founding member of the R3 group, which was started 10 years ago as a forum to discuss mutual interests among an interdisciplinary group of scientists.

Once a month, every month, for the past 10 years, an assortment of scientists from all corners of the university have been coming together to collaborate around one topic central to all their research: DNA replication, recombination and repair.

The R3 Group has representatives from 10 core labs among its regular members, in the Departments of Biomedical Sciences, Chemistry and Chemical Biology, Plant Breeding and Genetics, Microbiology, and Molecular Biology and Genetics. Some work with bacteria, others with plants or animals, but all of the scientists explore the processes that help control genetic stability.

The group has welcomed more than 80 speakers to its monthly meetings, and it recently hosted three prominent guests – Tony Huang of New York University, Anne Villeneuve of Stanford University and Graham Walker of the Massachusetts Institute of Technology – as part of a 10th anniversary celebration Oct. 3-4.

More than 200 people from Cornell and other institutions gathered in the Biotechnology Building and Weill Hall to hear about a range of research into the fundamental science of how all organisms deal with the enormous task of replicating and segregating their genomes with minimal errors.

“This basic science is critical in understanding the genetic basis of diseases, primarily birth defects and cancer,” said John Schimenti, director of the Center for Vertebrate Genomics at the College of Veterinary Medicine, one of the organizers of the conference.

By studying DNA replication and cellular responses to carcinogen damage, Walker has gained insights into an emerging issue in cancer treatment: chemotherapy resistance. During his keynote address, the MIT biology professor explained how his discoveries about translesion polymerases could be used to combat this resistance and improve treatment. He also shared his research into replication processes related to stress responses and oxygen use in bacteria, which could have an impact on our use of other medicines, such as antibiotics and antimicrobials.

Walker’s presentation provided great examples of how research can move from simple-model systems like bacteria and yeast into more complex animal and human systems, said Joe Peters, a founding member of the R3 group.

The associate professor of microbiology is the one to whom members turn with questions about basic bacterial systems; he, in turn, is often inspired by their approaches.

“There is plenty I learn from them in terms of greater questions. I can see how my research might be applicable to people, and it helps me think about the bigger picture while formulating future projects,” Peters said.

“Science has gotten so advanced that we now have such narrow specializations in each discipline,” he added. “This group really exemplifies the Cornell spirit of collaboration that transcends academic units. That’s when exciting things happen in science.”