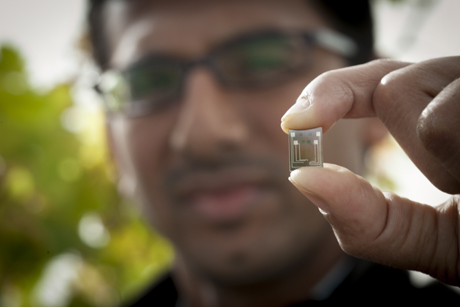 Jason Koski/University Photography
Vinay Pagay holds a "lab on a chip" that measures moisture levels in soil and can be embedded in plant stems for accurate information on water stress. The researchers hope to mass produce the chips for as little as $5 each.

Crop growers, wine grape and other fruit growers, food processors and even concrete makers all benefit from water sensors for accurate, steady and numerous moisture readings. But current sensors are large, may cost thousands of dollars and often must be read manually.

Now, Cornell researchers have developed a microfluidic water sensor within a fingertip-sized silicon chip that is a hundred times more sensitive than current devices. The researchers are now completing soil tests and will soon test their design in plants, embedding their “lab on a chip” in the stems of grape vines, for example. They hope to mass produce the sensors for as little as $5 each.

In soil or when inserted into a plant stem, the chip is fitted with wires that can be hooked up to a card for wireless data transmission or is compatible with existing data-loggers. Chips may be left in place for years, though they may break in freezing temperatures. Such inexpensive and accurate sensors can be strategically spaced in plants and soil for accurate measurements in agricultural fields.

For example, sophisticated vintners use precise irrigation to put regulated water stress on grapevines to create just the right grape composition for a premium cabernet or a chardonnay wine. While growers can use the sensors to monitor water in soils for their crops, civil engineers can embed these chips in concrete to determine optimal moisture levels as the concrete cures.

“One of our goals is to try and develop something that is not only a great improvement, but also much cheaper for growers and others to use,” said Alan Lakso, professor of horticulture, who has been working on water sensing for 20 years.

The sensors make use of microfluidic technology – developed by Abraham Stroock, associate professor of chemical and biomolecular engineering – that places a tiny cavity inside the chip. The cavity is filled with water, and then the chip may be inserted in a plant stem or in the soil where it, through a nanoporous membrane, exchanges moisture with its environment and maintains an equilibrium pressure that the chip measures.

Using chips embedded in plants or spaced across soil and linked wirelessly to computers, for example, growers may “control the precise moisture of blocks of land, based on target goals,” said Vinay Pagay, who helped develop the chip as a doctoral student in Lakso’s lab.

Ernest and Julio Gallo Winery and Welch’s juice company have already expressed interest in the sensors. And Cornell civil engineer Ken Hover has started working with Pagay and Lakso on using the sensors in concrete.

The researchers seek to understand how values gathered from sensors inside a plant and in soils relate to plant growth and function, so that growers can translate sensor values and optimize management.

The Cornell Center for Technology Enterprise and Commercialization is handling the intellectual property rights and patents.