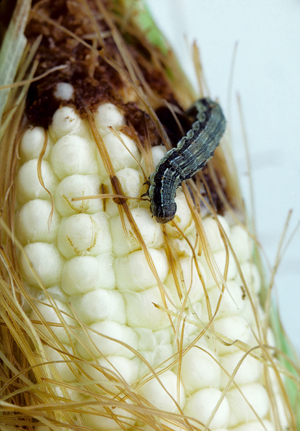 Jack Dykinga/USDA ARS Image Gallery
The corn earworm is an increasing concern because it is arriving earlier and in higher numbers into the northern U.S. where much of the processing and fresh market sweet corn is grown.

With the kernel-loving earworm, producing unblemished ears of sweet corn is difficult. Now a new study compares conventional insecticides to sweet corn plants bioengineered to produce insecticidal proteins from the soil bacterium Bacillus thuringiensis (Bt). The researchers found that the bioengineered plants produced a high proportion of unblemished ears and benefited the environment because they required fewer pesticide applications than conventional corn.

The study, published in the October issue of the Journal of Economic Entomology, compared Bt sweet corn’s rate of infestation and marketability with varieties genetically identical except for the absence of the Bt proteins. In 2010 and 2011, sweet corn trials were conducted in New York, Minnesota, Maryland, Ohio and Georgia, locations that differ in climate, management practices and pest pressure. They found that for pest management of the corn earworm pest, Bt sweet corn consistently performed better than its non-Bt counterparts, even those that were sprayed at conventional insecticide frequencies. And plants with two Bt genes performed better than those with a single Bt gene. According to Shelton, very little U.S. sweet corn is Bt, and this study helps quantify the potential environmental benefit of replacing sprays with biotechnology.

Corn earworm is a tricky pest to control with insecticide sprays. Moths lay eggs on fresh corn silks, a brief window of vulnerability before the larvae hatch and migrate below the husk where they are shielded from insecticides. And it doesn’t take long for a few insects to become an outbreak: Co-author Dan Olmstead, an entomology research support specialist and master’s student, observed a female moth laying eggs on 30 plants in 10 minutes. Infesting an acre would not even be a day’s work for few hundred females.

“An earworm beneath the husk is unacceptable in the fresh produce market, and for this reason sweet corn is intensively sprayed for insect pests which feed directly on the ears,” Shelton said. “We are looking for alternatives to spraying, which could benefit growers, consumers and the environment. Consumers should know that the Bt protein present in Bt sweet corn is essentially the same as that which organic growers have been spraying on crops for decades. Same protein, but a much better delivery system in Bt plants.”

According to Shelton, there is an urgent need for new and safer management technologies because the corn earworm is arriving earlier and in higher numbers into the northern United States, where much of the nation’s processing and fresh market sweet corn is grown. The authors predict that growers could realize increased profits because of lower inputs and higher marketability, while conserving populations of beneficial insects that keep damaging pests at bay.

This research was partially supported by federal Hatch and Smith-Lever funds, the agricultural experiment stations of the participating states and a New York State Specialty Crop grant.