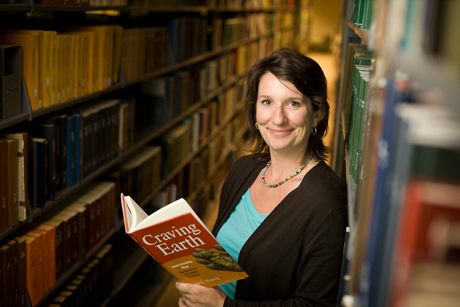 Sera Young, Ph.D. ’08, a research scientist in the Division of Nutritional Sciences, has been awarded the 2013 Margaret Mead Award, considered one of the most prestigious anthropology awards for junior faculty or scholars. She is the first from Cornell to receive this award.

Young won the prize, awarded jointly by the Society for Applied Anthropology (SFAA) and the American Anthropological Association (AAA), for her book, “Craving Earth” (2011, Columbia University Press), an account of the practice and the science behind pica – the craving and consumption of nonfood substances such as clay, chalk, starch and ice. In her book, Young surveys reports of pica over 2,000 years and hundreds of cultures to demonstrate that pica is widespread among people around the world. She also details the science behind how eating clay may affect our bodies in conflicting ways – from helping the body rid itself of toxins on the one hand, to binding iron and causing anemia on the other.

Researchers like Young are trying to understand the purpose of such behaviors and what the public health consequences might be. With “Craving Earth,” Young took her research to the public by writing it in a style accessible to all readers.

“I hope that this [award] broadens the public’s awareness of pica as both a public health issue and rich cultural phenomenon, in ways that really garner support for getting to the bottom of the pica mystery,” said Young.

In her current work, Young is using this same multidisciplinary approach to study the social and health consequences of food insecurity among HIV-infected mothers and their families in sub-Saharan Africa.

Young did most of the research behind “Craving Earth” while she was a graduate student in the Division of Nutritional Sciences. She joined the Cornell faculty in 2011.

The award celebrates skills similar to those displayed by Margaret Mead, who had a talent for fine scholarship and for making anthropology accessible to a wider general audience. Mead, 1901-78, the author of numerous books, “for years the best known woman in the world, was also the best known anthropologist, with a particular talent for bringing anthropology fully into the light of public attention,” according to the Mead Award website.

Young will be honored at the AAA meeting in Chicago in November and again at the SFAA meeting in Santa Fe, N.M., next March.