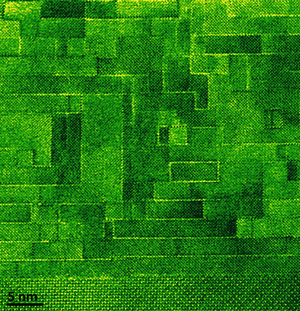 Ye Zhu/Muller group
High magnification image of the new tunable dielectric material, taken with Cornell's scanning transmission electron microscope. The atomic structure resembles a brick wall in which the horizontal and vertical lines, the "mortar," are believed key to the performance of the material.

Why do cell phones drop calls? Like a radio dial tuned to different frequencies (stations), cell phone antennas have tuning circuits that quickly switch frequencies when controlled by a voltage applied to a tunable capacitor. Cell phone companies want to improve these circuits to pack more discrete signals into a finite allocation of spectrum and minimize those pesky dropped calls.

A five-year, multidisciplinary collaborative research effort based at Cornell has resulted in the world’s best material for tunable capacitors – broadly called a tunable dielectric, a special insulator whose ability to store electrical charge changes when a voltage is applied. The research was published online Oct. 16 in the journal Nature.

“This is a radically different material compared to what people have been using for decades,” said Darrell Schlom, the Herbert Fisk Johnson Professor of Industrial Chemistry at Cornell, who led the international team. “What we have discovered is the world’s lowest-loss tunable dielectric.” (“Loss” refers to wasted energy, which drains cell phone batteries.)

The Cornell-designed and -created new type of tunable dielectric could greatly improve the performance of microwave circuit capacitors found in every cell phone and open up new possibilities for wireless communication at much higher frequencies.

Material and ‘materials by design’

The scientific achievement is twofold. It is the material itself, a layered strontium titanium oxide – not found in nature – created through molecular beam epitaxy, which Schlom’s lab uses to build up layered materials one atomic layer at a time by “spraying” atoms onto a surface.

The other breakthrough is the “materials by design” method used to make the material have the desired properties. The tunable dielectric and its properties were first envisioned on paper, tested on the computer, created in the lab atom by atom, patterned into a capacitor device and, finally, verified with electrical measurements. The result is a tunable dielectric capacitor with at least five times the performance of commercial tunable capacitors available today, according to Schlom.

By comparison, today’s commercially used tunable dielectric material is not a layered material and contains barium in addition to strontium, oxygen and proprietary additives. Thin films of such materials are rife with defects, which waste power and greatly lower the films’ performance in circuits – a problem cell phone companies would like to solve.

The Cornell thin film could be the answer. An atomic-resolution electron micrograph reveals its design. It looks like bricks and mortar, with very specific spacing between the well-defined interfaces. The layered structure is “forgiving” with regard to defects, Schlom said: The “mortar” portions seem to soak up many of the defects, which keep them away from the “bricks,” drastically improving the performance of this new variety of tunable capacitors.

The proof-of-principle demonstration of the new strontium titanium oxide requires further testing to confirm how the defects in the material are being mitigated and how to push its performance even further.

“It is clear that we have discovered a killer material,” Schlom said, “but it is likely that even better tunable dielectrics can be found using our approach.”

The paper, “Exploiting Dimensionality and Defect Mitigation to Create Tunable Microwave Dielectrics,” includes researchers from the National Institute of Standards and Technology in Boulder, Colo., and the Institute of Physics ASCR in the Czech Republic, among others. The first author is Che-Hui Lee, a former Pennsylvania State University graduate student who worked in Schlom’s former Penn State lab and finished his Ph.D. in Schlom's lab at Cornell. Lee was supported by an NSF Materials Research Science and Engineering Centers grant.