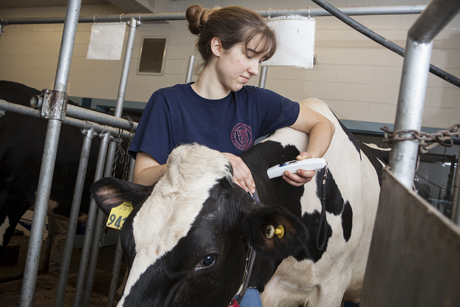 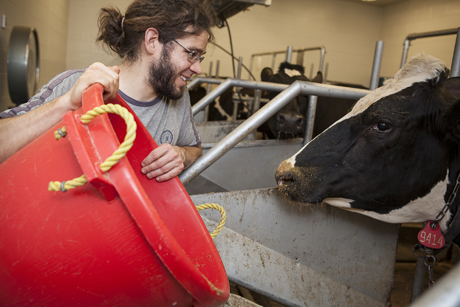 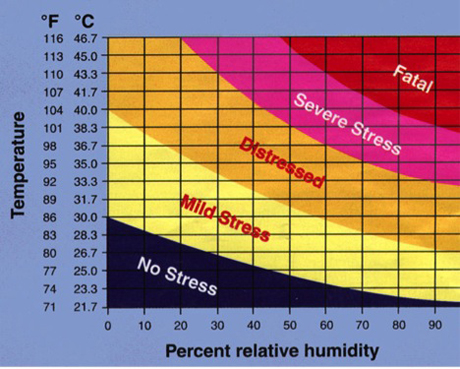 Journal of Dairy Science, D.V. Armstrong, 1994
Shifting stress levels with respect to temperature and relative humidity can be dangerous for dairy cows.

The dog days of summer can be brutal for cows. When dairy cattle get too hot, it means reduced milk production, decreased reproductive activity and sometimes death – and for dairy farmers, lost income.

To help farmers keep cows cool, Cornell engineers are collaborating on a multidisciplinary research project supported by the New York State Energy Research and Development Authority (NYSERDA) that could provide an alternative to the fans, misters, sprinklers and other heat mitigation strategies typically used.

Conductive cooling refers to heat transfer through direct contact between surfaces of different temperatures; the concept of conductively cooling cows was previously studied by Kelley Bastian, a former graduate student of Kifle Gebremedhin, professor of biological and environmental engineering. Kristy Perano, a current graduate student with Gebremedhin, is now developing and validating the concept further to determine whether conductive cooling with chilled mats underneath cows have measurable effects on their heat stress levels, milk production and overall health.

“A lot of people in the Northeast just use fans for their cooling systems,” said Perano, who grew up on a beef cattle ranch in California. “In the west and south there are significant problems with heat stress, and with global warming you could have more problems here.”

For the NYSERDA project, they are teaming with graduate student Joe Usack, and his adviser, Lars Angenent, associate professor of biological and environmental engineering, who is the project’s principal investigator. They are testing the feasibility of waste heat capture from a biogas generator as the power source for such a conductive cooling system. The project also includes Curt Gooch, senior extension associate with the PRO-DAIRY program in animal science.

Over the summer, Perano and Usack gathered data, designed and installed necessary instrumentation, and cared for cows housed in the Large Animal Research and Teaching Unit on campus. In a heated room, four of eight cows had access to conductively cooled mats, and several times a day the students took such measurements as respiration rates, sweating rates, core temperature and milk production levels. The mats were cooled with 40-50 degree water using a closed-loop system of pumping and recirculating chilled water that the students designed.

Usack spent several afternoons at Sunnyside Farms in Venice Center, N.Y., which gave him permission to collect energy usage data from the farm’s anaerobic digester engine-generator set. Waste heat from the engine, fueled by anaerobic digester biogas, could be the perfect power source for a conductive cooling system.

An anaerobic digester uses natural microbial processes to convert a portion of a cow’s manure into methane, a biogas that Sunnyside and other farms use to power a generator for electricity. The idea behind the project is to develop and assess a cooling system for cows by using the excess waste heat produced by the biogas-powered generator. The waste heat would be converted to cold water with absorption chillers, which is a system that exists commercially.

Up to 70 percent of a typical biogas-powered generator’s total energy ends up as waste heat, Angenent said, comparing this to the relative low efficiency of combustion engines in cars. The key is figuring out whether harnessing that lost energy could prove effective and cost efficient in the context of a conductive cooling system.

“This is a systems project,” Angenent said. “None of the components are new inventions, but the application of all the different parts together – the digester, generator and cooling system – is new.”

The project is funded by NYSERDA under a proposal aimed at helping the agriculture industry in New York adjust to climate change.