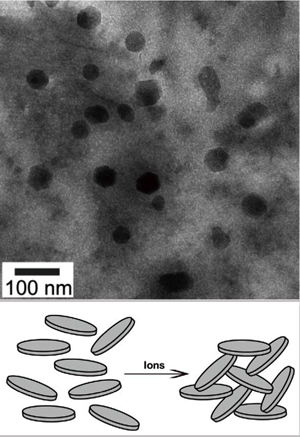 Provided
Clay – an assortment of silicates leached from rock by weathering, is made up of tiny disks a few nanometers (billionths of a meter) across, as seen in an electron microscope photo, above. The disks have negative charges on the flat surface and positive charges around the rim. Herded by charged ions in sea water the disks join in a “house of cards” structure that makes a spongy mass.

Clay – a seemingly infertile blend of minerals – might have been the birthplace of life on Earth. Or at least of the complex biochemicals that make life possible, Cornell biological engineers report in the Nov. 7 online issue of the journal Scientific Reports, published by Nature Publishing.

“We propose that [in early geological history] clay hydrogel provided a confinement function for biomolecules and biochemical reactions,” said Dan Luo, professor of biological and environmental engineering and a member of the Kavli Institute at Cornell for Nanoscale Science.

In simulated ancient seawater, clay forms a hydrogel – a mass of microscopic spaces capable of soaking up liquids like a sponge. Over billions of years, Luo explained, chemicals confined in those spaces could have carried out the complex reactions that formed proteins, DNA and eventually all the machinery that makes a living cell work. Clay hydrogels could have confined and protected those chemical processes until the membrane that surrounds living cells developed, he said.

The Luo group previously has used synthetic hydrogels as a “cell-free” medium for protein production. Fill the spongy material with DNA, amino acids, the right enzymes and a few bits of cellular machinery and you can make the proteins for which the DNA encodes, just as you might in a vat of cells. To make the process useful for producing large quantities of proteins, such as for drug manufacturing, you need a lot of hydrogel, so the researchers set out to find a cheaper way to make it. Postdoctoral researcher Dayong Yang noticed that clay formed a hydrogel. Why consider clay? “It’s dirt cheap,” said Luo. Better yet, it turned out unexpectedly that using clay enhanced protein production.

But then it occurred to the researchers that what they had discovered might answer a long-standing question about how biomolecules evolved. Experiments by the late Carl Sagan of Cornell and others have shown that amino acids and other biomolecules could have been formed in primordial oceans, drawing energy from lightning or volcanic vents. But in the vast ocean, how could these molecules come together often enough to assemble into more complex structures, and what protected them from the harsh environment? Scientists previously suggested that tiny balloons of fat or polymers might have served as precursors of cell membranes. Clay is a promising possibility because biomolecules tend to attach to its surface, and theorists have shown that cytoplasm – the interior environment of a cell – behaves much like a hydrogel. And, Luo said, a clay hydrogel better protects its contents from damaging enzymes (called “nucleases”) that might dismantle DNA and other biomolecules.

How these biological machines evolved remains to be explained, Luo said. For now his research group is working to understand why a clay hydrogel works so well, with an eye to practical applications in cell-free protein production.

Luo collaborated with Max Lu, a professor at the Australian Institute for Bioengineering and Nanotechnology at the University of Queensland in Australia. The work was performed at the Cornell Center for Materials Research Shared Facilities, supported by the National Science Foundation.

Cell-free protein production in a hydrogel