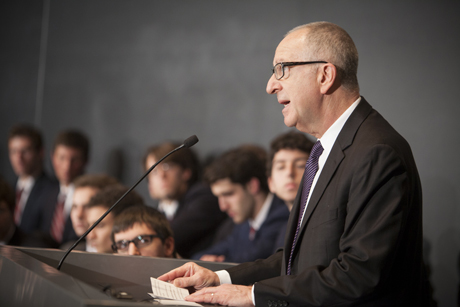 It is rare that 273 words can have a profound impact. In just over two minutes on Nov. 19, 1863, Abraham Lincoln reiterated the principles of human equality espoused by the Declaration of Independence and proclaimed the Civil War as a struggle for the preservation of the Union with a new birth of freedom.

The Gettysburg Address was delivered at the dedication of the Soldiers’ National Cemetery in Gettysburg, Pa. at the height of the Civil War.

To commemorate its 150th anniversary, Cornell Library’s Division of Rare and Manuscript Collections sponsored a faculty panel discussion and a reading of the Gettysburg Address by President David Skorton Nov. 19. The document, which is part of Cornell’s collection, is one of five in existence handwritten by Lincoln.

“Abraham Lincoln’s address at the battlefield of Gettysburg in Pennsylvania is considered one of the greatest speeches in American history,” noted panelist, Margaret Washington, professor of history.

Edward E. Baptist, associate professor of history, noted that, “This was, in fact, one of the two key turning points in U.S. history and maybe in human history since the beginning of the industrial revolution.”

To explore why, the panelists discussed the address in the context of human nature, gender and race.

Shirley Samuels, professor of English and American studies, spoke about birth and death in the context of gender. Though gender is not directly referenced in the address, Samuels sought to remember the role of women in bearing those soldiers who fought in the Civil War.

Baptist addressed the profitability of slavery. Citing the essence of human nature, he said, “We wildly underestimate the power of slavery to corrupt, to persuade people to abandon ideals of liberty and natural rights.”

In referencing the new film “12 Years a Slave,” based on a true story about a free African-American fiddler who was illegally sold into slavery, Washington said, “While there was a silver lining for Solomon Northrop, what about the other 4 million enslaved men, women and children left behind?” Washington asked that the audience consider those millions while Skorton read the Gettysburg Address.

After Skorton’s reading, the Cornell Glee Club performed a new piece commemorating the anniversary. Prior to the commemoration, Cornell hosted a series of events, including a Nov. 12 screening of the documentary “The Gettysburg Story”; a lecture with Gabor S. Boritt, author of the “Gettysburg Gospel: The Lincoln Speech Nobody Knows,” Nov. 13; and an exhibit in Kroch Library.