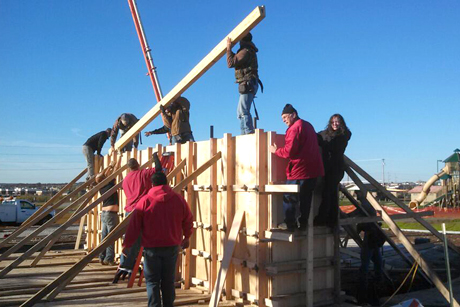 Keith Tidball
Volunteers raise posts on the future site of a new pavilion in Joplin, Mo.

Keith Tidball, senior extension associate in the Department of Natural Resources and associate director of Cornell’s Civic Ecology Lab, led a team of Drury University students – working with the U.S. Forest Service and other partners – on projects to “blitz build” the Butterfly Garden and Overlook in Cunningham Park in Joplin, Mo., Nov. 8. Joplin was hit by a catastrophic EF5 tornado May 22, 2011.

The group worked, “Extreme Makeover” style, on five design elements of the project designed by Drury students in their third year of architectural studies. These design elements for sacred open space include a portal, a path, a destination, a place of repose (a bench in this case) and a sense of surround. A busload of students built stone walls while music therapy students played music and provided refreshments. On Nov. 9, Joplin Community Day, crews finished construction and cleaned up the site.

Cornell and US Forest Service researchers worked with Drury students to gather stories of courage, heroism and resilience from community members to be included in the new educational space and healing garden at Cunningham Park.

“The power of green, living things to heal after a tragedy is on display here in Joplin,” Tidball said. “The people of this community have demonstrated an immense amount of resilience, and have called upon the potent symbols of life to summons the kind of resolve to continue on, and to come back stronger, better than before. It’s so inspiring to see the students come to Joplin and come in contact with that, to experience that while giving back to the community at the same time.”

The project is the result of TKF Foundation’s Open Spaces Sacred Places initiative, which fosters natural settings for the public to help them cope with stress resulting from disasters. The foundation awarded Tidball and his team a $585,000 grant, which was used to create open spaces for recovery and healing in Joplin and New York City.

Tidball leads a multidisciplinary research and design team that proposed the “Landscapes of Resilience” project, which is studying “Greening in the Red Zone” or the role of open spaces and greening activities in recovery from disturbances like the Joplin tornado – which killed 161 people and caused millions of dollars of destruction – and Superstorm Sandy, which hit New York City and the surrounding area Oct. 29, 2012, killing 72 people and causing extensive damage.

Partners in the Joplin project include Cornell University, the U.S. Forest Service, Drury University, Joplin Parks and Recreation and the Missouri Department of Conservation. Funding, materials and labor for the project were donated.