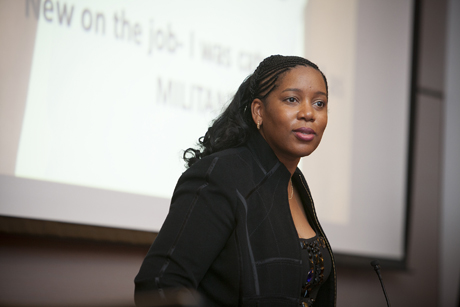 According to recent studies, more than one-third of all U.S. employees will face bullying in the workplace; of those, a higher percentage of bullying incidents will occur in colleges and universities than in corporations.

Drawing from data in her book, “Bully in the Ivory Tower: How Aggression and Incivility Erode American Higher Education,” Leah Hollis cited such statistics in her address at the 15th Annual Cornell University Diversity Update Conference Nov. 18 to describe the effects of workplace bullying and provide countermeasures to stop it.

The address to an audience of more than 150 at the Statler Hotel was part of a daylong series of presentations on the ways in which workplace bullying and such related behaviors as harassment, bias and discrimination undermine an environment of civility, respect and inclusion.

“Who is your 42?” Hollis asked, alluding to the jersey number of baseball legend Jackie Robinson. As the first person of color to play in the major leagues, Robinson was subjected to bullying and harassment by players, coaches and fans. It took a leader, baseball executive Branch Rickey, to support Robinson and help him deal with the bullying, Hollis said.

“Leadership is the key,” she said, noting that leaders can set a positive tone, define the behaviors that are or are not acceptable within the group, and model appropriate uses of power.

Bullying occurs in situations of power inequity, she said, which explains why, according to one study, 72 percent of bullying instances in the workplace are perpetrated by supervisors. Victims of bullies tend to be those with the least power: workers under the age of 25 or older than 55, African-Americans, women and lesbian, gay, bisexual and transgender employees.

The costs of even a single bully extend throughout the organization, Hollis said. In addition to the toll on the bullied individual, work time is lost while the person recovers composure or turns to co-workers for support. Half of those bullied think of leaving or actually leave the organization, Hollis said. One study estimates that bullying costs U.S. organizations about $64 billion due to turnover and disengagement, she said.

What can leaders do? Stop the bully early, Hollis said. Establish a clear anti-bullying policy and enforce it. Add bullying and civility to training on discrimination and harassment and conduct 360-degree performance evaluations for those in charge. Be a visible model of the behavior you want to see.

Finally, be an advocate for all of your staff, Hollis said.