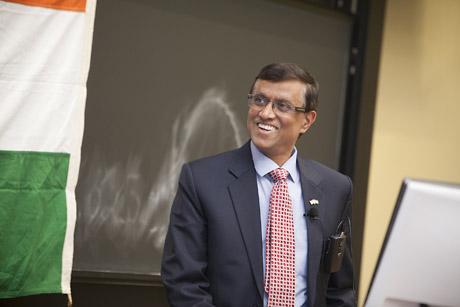 In 1947 India was 550 independent states with 350 million people speaking more than two dozen languages and practicing a variety of religions. No single king had ruled over India in its history. And yet 66 years ago, the country peacefully banded together to form the Union of India after achieving independence from Britain.

Dnyaneshwar Mulay, consul general of India, said, “In India we say a Sanskrit adage which means that ‘While I am one, I am many.’”

Mulay discussed India’s history and independence in “India: The Story of Growth, Democracy and ‘Soft Power,’” Nov. 8 on campus. Mulay emphasized the significance of India’s progressive constitution, which formed a democracy for such a varied population.

India is “the most complex and most interesting democratic experiment … on all of planet Earth,” said Mulay. While it would seem a population of 780 million would present challenges, he said that India has never had an issue with transfer of power or had a government collapse. Even with 10 to 15 political parties running the country at any given time, Mulay reported that India has never had a dispute over election results. “By and large I see democracy to be flourishing in India,” he said.

India’s constitution, Mulay said, was revolutionary due to its neutral stance on religion. “As a country, which has Hinduism as a major religion … it would have been very easy for the forefathers to declare India as a Hindu country … But it is, again, to show the remarkable vision and foresight of people like Mahatma Gandhi, people like Nehru [India’s first prime minister], that they were able to very, very specifically declare India as a secular country. And the moment you put something like that in the constitution and its preamble, it becomes a kind of a sacred thing.”

Yet religion has had a strong influence on the country’s foundation, Mulay noted. For example, Buddhism had a large impact with its promotion of “peace, tranquility, harmony and personal salvation.” And soft power, defined as “a mechanism to influence opinion and influence views abroad, particularly, but also domestically,” such as that of Gautama Buddha, has also been tremendously influential in India, Mulay noted. Buddha, first great icon of Indian soft power, “refused to believe in the inequality of human beings,” said Mulay.

Gandhi was another example of an Indian who wielded soft power, Mulay said. Gandhi traveled India extensively in a third-class train compartment to spread his word of peace and lend aid to those who needed it. Mulay described how Gandhi once gave the clothes off his back to a poor citizen during his journey. His nonviolent methods would eventually help India become a sovereign state, Mulay reported. “Soft power is very important to bring harmony, to bring progress [and] to bring understanding,” Mulay said.

Diaspora – a population dispersed beyond its borders – is also an important soft power for India, Mulay said. The government, he noted, has even created a ministry especially for overseas Indians to make them feel more connected. Mulay highlighted several successful members of the abroad Indian community and said, “In the United States alone there is a galaxy of people who have done well.”

Mulay’s visit was sponsored by Cornell Institute for Public Affairs. The colloquium was a Cornell Public Affairs Society initiative in association with its International Affairs Forum.