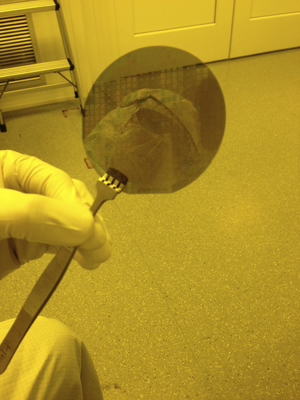 Provided
Kevin Matocha, president of Monolith Semiconductor, captures a self-portrait in the mirror surface of a silicon carbide wafer at the CNF.

To enhance efficiency in electric energy transfers from high-voltage grids to your home’s toaster and television, the U.S. Department of Energy’s ARPA-E program awarded a $3.2 million grant in October to Monolith Semiconductor, an Ithaca-based startup company.

Monolith Semiconductor exclusively uses the Cornell NanoScale Science and Technology Facility (CNF) to make state-of-the-art silicon carbide MOSFET (metal–oxide-semiconductor field-effect transistor) switches, which can amplify or reduce large volumes of power during energy transfer. The MOSFET switches step down electricity from the grid to your home and office – with almost no energy loss.

This means, for example, that future electric cars plugged into your carport likely will be easier to charge, travel longer distances on cheaper electricity and become less expensive to manufacture, says Kevin Matocha, Monolith Semiconductor president.

Within four years, the company hopes to sell silicon carbide switches at today’s cheap silicon prices. “With the help of the CNF, we’re developing the manufacturing processes to dramatically reduce the cost of silicon carbide switches – which makes them accessible and ideal for renewable energy inverters, power supplies, industrial motor drives, electric vehicles and a smarter electrical grid,” says Matocha. 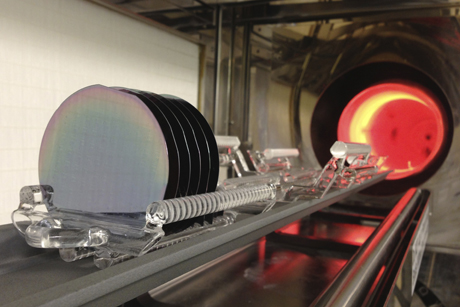 Provided
Monolith Semiconductor's silicon carbide wafers being loaded into a high-temperature furnace at the CNF.

ARPA-E, the Department of Energy’s Advanced Research Projects Agency-Energy, awarded 14 projects nationwide to develop next-generation power conversion devices. The agency believes these projects will influence how the electrical energy of tomorrow is controlled on the grid.

“To transform America’s energy infrastructure, we will need innovative technology options that can radically improve how we convert and use energy,” says Cheryl Martin, deputy director of ARPA-E. “[These projects] could result in some of the critical components needed to update our aging infrastructure and reduce power losses from the grid.”

Monolith Semiconductor started using the CNF cleanroom in December 2012, and the company created its first prototypes in May 2013. Matocha says his company uses CNF for its etchers, furnaces, and deposition and photolithography tools. “The main reason we are working at the CNF is their collection of tools and – equally important – the well-qualified engineering staff that keeps the tools up and running and available for use,” Matocha says. The National Science Foundation supports the CNF.