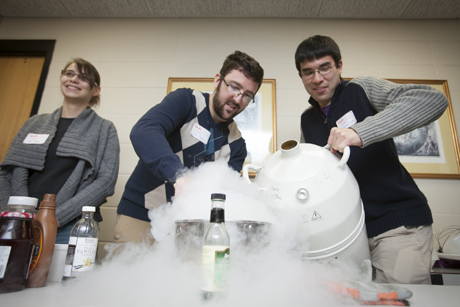 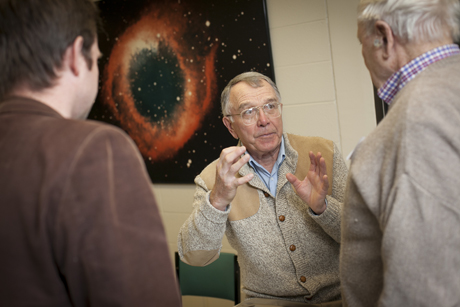 At the launch of a series of informal gatherings of Friends of Astronomy (FoA) Nov. 9 in the Space Sciences Building, speakers from the Cornell space sciences community offered an overview of the current state of Cornell astronomy.

“Frontiers of Astronomy” began with an introduction by FoA chair Charles Mund Jr. ’81, who said the purpose of the gathering was to celebrate the accomplishments of the department as they contribute to the advancement of knowledge: “Science works best when it’s remembered that knowledge is the common property of all, and everyone can contribute given a chance,” he said.

Fred Young ’64, M.Eng. ’66, MBA ’66, said many FoA members have been fascinated by cosmology since childhood, “so when we hear someone talking about dark energy, it’s ‘wow!’ … because the science is so mind bending.”

“Astronomy is a service course for nonscience majors” that fulfills a distribution requirement Herter said. “We promote physical understanding, reflective, skeptical inquiry in a scientific context.”

Herter also said that Cornell’s new memorandum of understanding with the Jet Propulsion Laboratory (JPL) will give staff and faculty more chances to participate in missions and students more opportunities to work at JPL.

Riccardo Giovanelli, director of the CCAT telescope project, gave an update on the telescope project that Herter called the department’s “highest priority.” The design review phase was completed recently, Giovanelli said, “and thanks to the generous support of Fred Young, we’ll be breaking ground in the next couple of months, by building the access road to the site.”

Postdoctoral researcher Leo Stein spoke about his research with gravitational wave theories and said he chose to bring his prestigious Einstein Fellowship to Cornell “because the people probing general relativity here [at Cornell] are some of the best in the world.”

Graduate student Ryan Lau, who works with Herter on NASA’s flying observatory SOFIA (Stratospheric Observatory for Infrared Astronomy), said that despite missing a scheduled flight because of the government shutdown, his research on the galactic center is going well, with a paper about to publish. He’s scheduled to go up in SOFIA for more measurements again in a few weeks.

Jason Hofgartner, a graduate student working on Titan’s oceans with Jonathan Lunine, the David C. Duncan Professor in the Physical Sciences, presented their latest research demonstrating that ice could be floating in Titan’s mixed methane-ethane lakes and seas – unlike what would be expected for pure methane and ethane seas. Hofgartner also showed photos that may be the first proof of such floating ice.

The mysteries of dark energy are being probed by cosmologist Rachel Bean as co-leader of DESC (Dark Energy Science Collaboration) activities to apply LSST data to test cosmological theory and combine it with data from other surveys. “It’s a very exciting time,” she said. “Instruments being built now, like CCAT, will be an order of magnitude better than what we have now.”

Cosmologist Dominik Riechers said his research into galactic evolution will also benefit from CCAT; his recent discovery of a primeval galaxy unexpectedly churning out stars has already confounded cosmological theories.

Finally, comet specialist and professor emeritus Joe Veverka cautioned not to get too excited about the impending visit of comet Ison next week, expected by some to be the “comet of the century.” “My prediction is that comet Ison won’t get much brighter than its current ninth magnitude,” he said, offering the consolation that he does expect it to survive perihelion, its current journey around the sun.

The event, sponsored by the Department of Astronomy, concluded with a liquid nitrogen ice cream party hosted by astronomy graduate students.