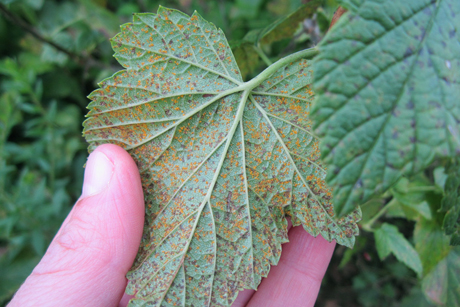 Provided
Spores of white pine blister rust produced on a leaf of a "Titania" currant, known for possessing immunity to most strains of blister rust.

A white pine-decimating fungus has mutated, allowing it to infect immune and resistant plants, which is alarming researchers, growers, loggers and forest managers.

White pine blister rust (WPBR) infects white pines and Ribes, a plant genus that include gooseberries and currants. Some states such as Maine prohibit planting Ribes to protect valuable Northeast pines, yet New Hampshire, Connecticut, New York and Massachusetts, among others, have developed currant and gooseberry fruit industries in the last decades using WPBR immune varieties.

Cornell and University of Connecticut researchers have identified WPBR-immune currant cultivars infected with the disease in Connecticut in the last few years, and more recently in New Hampshire. In areas where commercial currants have been infected, nearby white pines also have the disease.

“The prevalence is not well understood, we only found it in New Hampshire because we were looking for it,” said Kerik Cox, associate professor of plant pathology and plant-microbe biology, of the mutated WVBR. “If we started looking elsewhere, we might be surprised. It could really damage the white pine industry in five to 10 years,” he added.

So far, the virulent strain has not been identified in other states.

The fungus has a two-stage life cycle, with the first part spent on white and related pines, and a sexual reproduction stage on Ribes. The rust infects Ribes, causing them to lose their leaves, and then, in turn, spreads to pines. The pines develop cankers that fatally disrupt the trees’ vascular system.

Tests at Cornell’s New York State Agricultural Experiment Station in Geneva, N.Y., have proven that the mutant fungus does indeed cause infection in immune Ribes varieties, according to a 2011 report co-authored by Cox and Cornell and University of Connecticut colleagues published in the American Phytopathological Society’s journal, Plant Disease.

Researchers at the Canadian Forest Service have also identified a few genetic mutations in the virulent WPBR strain from Connecticut that allow it to overcome a gene that controls resistance in immune currants. All the Ribes cultivars have the same resistance gene.

The rust’s threat to currant production is minor compared to how devastating it could be to the Northeast pine industry, said Cox. Infections can ruin entire stands of pines, which take decades to grow, and thereby disrupt the logging industry.

The problem can be managed with safe fungicide applications to Ribes plants on a 21-day program, with two to four treatments, starting at bloom until fruiting, Cox said.

He added that future work will seek to ensure that the breeding material used to develop immune Ribes varieties still contains the rust-resistant gene, and that it hasn’t been lost or bred out over the years.

Cornell, the U.S. Forest Service, New Hampshire Division of Forests and Lands, and the Canadian Forest Service are collaborating to assess the impact of WPBR on Ribes and nearby white pine.