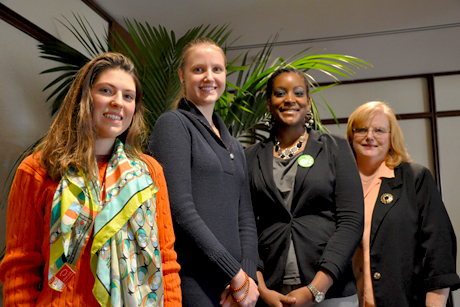 On the day the United Nations announced that global carbon dioxide levels had reached their worst levels in history, Cornellians reported that the strategies to reduce the university’s carbon footprint are working, but the campus has a long road to meet its carbon neutrality goals by 2050.

In discussing campus efforts, Skorton said that easy-to-fix strategies are in place, but hard decisions are ahead.

“As bold as [going coal-free has] been, it’s not obvious what the next three or four or five bold moves are going to be,” he said, urging the sustainability leaders to find ways to achieve net-zero carbon emissions by 2050. Cornell has reduced carbon emissions by 32 percent since Skorton signed the Presidents Climate Commitment in 2007. The next steps in significantly reducing our carbon footprint won’t be easy, he said.

“So now we’re going to be slugging it out on this problem, day-by-day, hour-by-hour, decision-by-decision. Every single decision is going to be tough,” Skorton said. “Buckle up and hang on tight. We’re really going to have to do the hard stuff now.”

When asked how he would write a legacy headline for Cornell’s carbon reduction, Skorton replied, “Grassroots university community comes together on difficult issues.” He explained that further reducing our carbon emissions will take everyone on campus.

“Going forward, a lot of it requires us coming together as people who don’t line up [ideologically] on certain issues,” he said. “There’s a certain amount you can do from the bully pulpit … you have to invite people to come together.”

Elmira Mangum, vice president for budget and planning, noted that the university’s new budget policies allow for a long-term sustainable campus. She said that many costs to units had been invisible. Now, occupiers of campus space take “ownership,” in that they pay for the utilities, maintenance and care – and they can see the direct costs and act to save money. “Our behaviors impact our carbon footprint,” she said.

At the summit’s lunch, winners of the Cornell University Partners in Sustainability Award were announced: