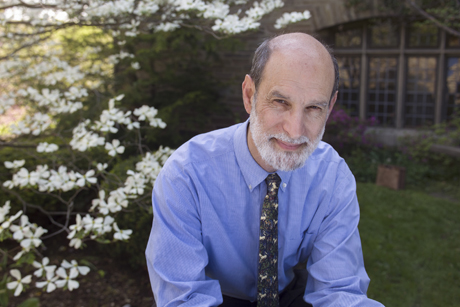 He arrived at Cornell in 1965 as an assistant professor of history, served on the Department of History faculty until his retirement in 2008, then returned in the fall 2013 semester to teach – all the while writing or editing more than three dozen books in diverse areas of history.

Kammen’s “People of Paradox: An Inquiry Concerning the Origins of American Civilization” (1972) won the 1973 Pulitzer Prize for history. “A Machine That Would Go of Itself: The Constitution in American Culture” (1986) was awarded the Francis Parkman Prize and the Henry Adams Prize.

Kammen was an elected member of the National Academy of Arts and Sciences and a past president (1995-96) of the Organization of American Historians. At Cornell Kammen served as chair of the history department and as director of the Society for the Humanities.

Department of History Chairman Barry Strauss called Kammen a “giant of American historiography” and a “dedicated teacher and a generous colleague.” Gretchen Ritter, the Harold Tanner Dean of Arts and Sciences, said Kammen delved “again and again into the contradictions that animate American political culture and public life.”

Richard Polenberg, the Marie Underhill Noll Professor of American History Emeritus, said Kammen “was known to historians as an outstanding scholar and to students as an inspiring teacher. But his friends will remember him most of all for his generosity, his kindness, his integrity, his supportiveness and his wide-ranging intellectual curiosity.”

Kammen was born Oct. 25, 1936, in Rochester, N.Y., grew up in the Washington, D.C., area, and attended George Washington University and Harvard University, where he earned a Ph.D. in 1964.

Concentrating his scholarship at first on the colonial period of American history, Kammen broadened his scope to include legal, cultural and social issues of American history in the 19th and 20th centuries. His 1991 book, “Mystic Chords of Memory: The Transformation of Tradition in American Culture” helped to create the field of memory studies. His books “Robert Gwathmey: The Life and Art of a Passionate Observer” (1999) and “Visual Shock: A History of Art Controversies in American Culture” (2006) placed Kammen at the nexus of art and cultural history.

When his 1999 book, “American Culture, American Tastes: Social Change and the 20th Century,” came out, Kammen told an interviewer how his work, too, was changing: “Once upon a time, cultural critics in the United States really made a difference, and they were key determinants. So were faculty members at universities.” Today, he said, students demand “courses devoted to aspects of popular culture, even mass culture.”

At Cornell students responded to Kammen’s teaching style and sense of humor, calling the history professor “brilliant,” “engaging” and “enthusiastic,” according to Ritter. She said he was “representative of the best Cornell has to offer. He was part of a very distinguished group of American historians who helped make the Cornell history department nationally renowned.”

Kammen remained curious throughout his life, engaged across fields, writing essays and book reviews, and in 2010 published “Digging Up the Dead,” a book that explored the often-macabre humor of American reburials. Kammen, said Strauss, “had a wonderful and sometimes wicked sense of humor combined with sensitivity and thoughtfulness. He will be greatly missed.”

A memorial will be announced at a later date. Memorial contributions can be made to the Michael Kammen Children's Book Fund at the Tompkins County Public Library Foundation, 101 East Green Street, Ithaca, NY 14850.