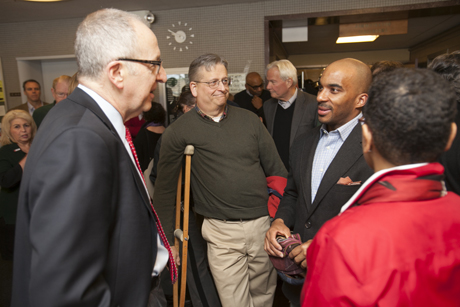 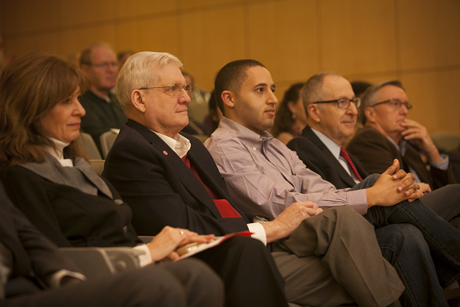 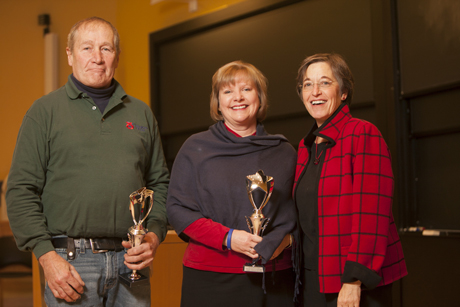 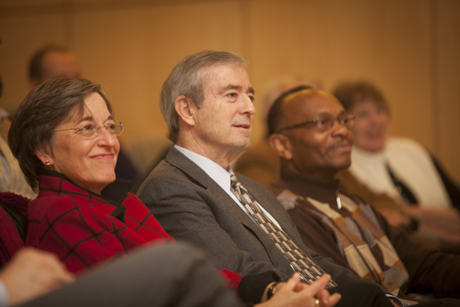 Collaboration between the local community and the university is essential for creating a world-class collegetown such as Ithaca, said President David Skorton at the third annual Town-Gown Awards (TOGO) ceremony at Morrison Hall Dec. 7, referring to the list of media accolades the area has received.

The TOGO awards recognized partnerships between Cornell and local organizations and leaders.

Kotlikoff said that the partnership also provides students with a different perspective on cancer research, quoting one student who said: “with this experience, the disease has evolved from a biological problem on a lab bench to something much more personal.”

Bob Weiss, associate professor of molecular genetics at the Veterinary College and director of the Comparative Cancer Center, accepted the award with Riter.

She noted that earlier this year TCAD sponsored an event at which Lance Collins, dean of the College of Engineering, provided community stakeholders with an overview of the Cornell NYC Tech campus and of entrepreneurship at Cornell.

Karen Brown, director of Campus Life Marketing and Communications, and Bill Apgar of the Tompkins County Probation Department were awarded TOGOs by Susan Murphy, vice president for student and academic services. They were recognized for their promotion and management of Dump and Run, an annual sale started in 2003 that collects reusable items to sell as a fundraiser for local charities. This year more than $60,000 was raised.

Murphy also presented TOGOs to Renee Farkas of Cornell’s Public Service Center and Paul Alexander, director of facilities and operations for the Ithaca City School District, for their support to the Pre-Orientation Service Trips (POST) program for incoming freshmen. The school district has provided housing for POST participants and, in return, participants help prepare schools for the September opening.

“Their commitment, enthusiasm and leadership enable them to provide every new participant with an excellent experience,” Murphy said. Nearly 200 students have stayed with the program past their first year, serving as team leaders and mentors.

Cornell University Counsel and Corporate Secretary Jim Mingle, who also serves on the board of directors of Ithaca Neighborhood Housing Services (INHS), presented a TOGO award to Paul Mazzarella, INHS executive director, and Lucy Brown, a retired Cornell employee and INHS founding member. INHS was formed in 1976 and has helped thousands of families improve their homes, buy a home or live in a high-quality, affordable apartment, including employees from Cornell.

Individual TOGO awards were presented by Skorton to local leaders who have or soon will be retiring, including Maryanne Banks, director of services and deputy commissioner for the Tompkins County Department of Social Services; Ann Colt, chief development officer for United Way of Tompkins County, Lenore Schwager; executive director at the Finger Lakes Independence Center; and David Squires, finance director for Tompkins County.

Upholding their commitment to service, a team of Meinig National Scholars collected canned food items at the event to donate to the Ithaca Kitchen Cupboard.

The award event was sponsored by Cornell’s Office of Community Relations, with Gary Stewart, director of community relations, serving as emcee.

Sushmitha Krishnamoorthy ’17 is a writer intern for the Cornell Chronicle.