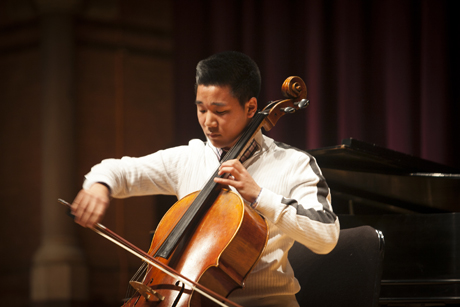 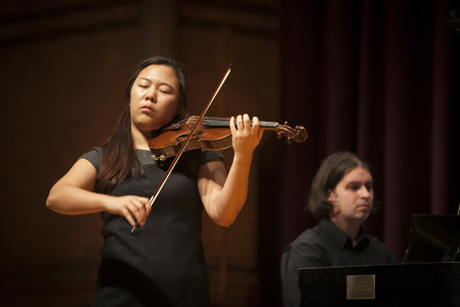 For the first time, the Cornell Concerto Competition has produced two winners: cellist Daniel Cho ’17 and violinist Ji Min Yang ’15. The winners were announced at the conclusion of the 10th annual competition, Dec. 15 in Barnes Hall.

Cho and Yang will perform on campus with the Cornell Symphony Orchestra March 7, 2014.

“I am always stunned at the high level of the competition. You could almost forget that it is held during finals week,” said Chris Younghoon Kim, director of orchestras. “Every year the judges have a tough time picking not only the winners but the finalists. The judges felt strongly that these two exceptional performers both deserved a chance to perform with the Cornell Symphony Orchestra. I am very much looking forward to collaborating with these two artists.”

Cho, who was accompanied by Blaise Bryski on the Dvořák Cello Concerto , studies music with senior lecturer John Haines-Eitzen and is co-principal cellist with the symphony orchestra. A freshman pre-med biology major with a business minor, he began playing the cello at age 5 and has performed with the Greater Buffalo Youth Orchestra.

Yang was accompanied by Joe Pepper on the Korngold Violin Concerto  . A chemical engineering major, she studies violin with assistant professor of music Ariana Kim and has performed as a soloist with several professional and amateur orchestras. She has been playing since age 7 and studied violin in the Korea National University of Art’s pre-college program for two years.

A third finalist, Serim An ’17, was accompanied by Blaise Bryski on Rachmaninoff’s Piano Concerto No. 2 . A biology and music major, she studies piano with professor of music Xak Bjerken. Earlier this year, An performed a Schumann piano concerto with the Ambler Symphony as a Menges Scholarship winner. She began her piano studies at age 5 at the Seoul Art Center’s Academy for Gifted Young Musicians.

The finalists were among eight undergraduate musicians selected to compete in the event’s first round, also Dec. 15. The other first-round competitors were HaeSoo Cheon ’15, Rachael Comunale ’14, Jeffrey C. Lu ’14, Jonathan Park ’14 and Greg Rosenthal ’17.