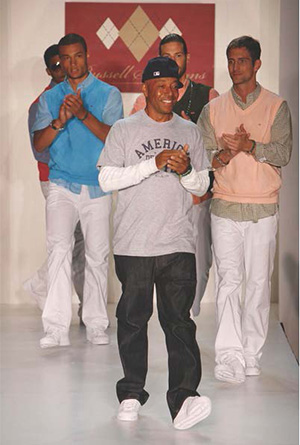 Johnny Nunez/Simmons Design Group Photo Archive
Russell Simmons on the runway at the debut of his new menswear line Argyleculture.

Emerging from an underground subculture of South Bronx black and Latino youth in the 1970s, hip-hop – characterized by rap music, DJing, breakdancing and graffiti art – has become a mainstream, global influence, according to a Cornell researcher.

A prime example of hip-hop’s rise from fringe culture to mass appeal is its prominence in American men’s fashion, according to a new paper in the November issue of Fashion Practice co-authored by Tasha Lewis, Ph.D. ’09, assistant professor of fiber science and apparel design in the College of Human Ecology. Just as rap music rules the charts, hip-hop menswear brands hang alongside iconic labels like Polo and Tommy Hilfiger on department store racks nationwide.

“Hip-hop has become a lifestyle that’s no longer just associated with African-Americans or Latinos,” Lewis said. “It really has a global reach.”

In the paper, “The Maturation of Hip Hop’s Menswear Brands: Outfitting the Urban Consumer,” Lewis and co-author Natalie Gray, CEO and founder of online retailer Stylekick, detail how hip-hop clothing has permeated popular culture and what differentiates its enduring brands (Rocawear, Phat Farm and Sean John) from less successful efforts.

The paper describes hip-hop’s “powerful mix of influences, especially for clothing” and how its wide appeal demonstrates “two theories of fashion diffusion: both trickle-down and trickle-up.” Though it lacks a singular look, hip-hop style initially stood out with tracksuits, sporting gear, oversized T-shirts, overalls and combat boots. During the 1990s, this “homeboy” look was adopted by major fashion labels, trickling up to become part of the mass culture. At the same time, the hip-hop subculture embraced the country club luxuries of more venerable brands, a trickle-down of features not usually marketed to urban youth.

“I look at men’s hip-hop fashion as a mixture evolving from very casual clothes to ‘remixing’ with more classic menswear by adding some of its own nontraditional touches,” Lewis said. “It can be very designer brand-focused or emphasize specific outfit elements – it’s a symbolic mix represented through the clothing.”

Hip-hop was born nearly 40 years ago, and its fashions are growing up, too. Tastemakers like Russell Simmons, Jay-Z and Sean Combs have “adopted a more sophisticated, tailored look that contrasted [hip-hop’s] urban roots but signified the entrepreneurial success of some of hip-hop’s iconic celebrities,” the authors write.

While conducting her research, Lewis interviewed Simmons, co-founder of the Def Jam music label and founder of Phat Farm and the newly launched Argyleculture fashion label.

“It was amazing to talk to him – he’s been there since the beginning,” Lewis said. “He’s seen the entire evolution of the industry.”

Sarah Cutler ’16 is a student communications assistant for the College of Human Ecology.