A book by English Professor Fredric V. Bogel argues for a new kind of literary analysis to be used in addition to the approaches that have come to dominate the field in the last 50 years.

In “New Formalist Criticism: Theory and Practice” (2013, Palgrave Macmillan), Bogel writes that criticism should emphasize the formal features of the text being analyzed – language, figures of speech, grammar and syntax – in order to focus on “literary specificity,” the linguistic or verbal character of literary works.

The book situates this new form of criticism, known as formalist criticism, in contemporary theory and practice, and also traces its roots and development, explores its role in other critical modes and in non-literary disciplines, and offers analyses of a range of texts.

While there have always been critics focusing on form, Bogel said new formalist criticism grew from the new criticism of the 1930s-1960s and arose in earnest in the 1980s as a reaction against modes of criticism that ignored form in favor of theme, ideology and other aspects of content. 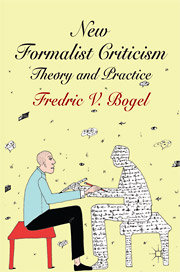 “The damage that inattention to form can inflict goes beyond the discipline of literary criticism,” Bogel said. “Even those who have traditionally emphasized content and/or context could profit immeasurably from the precision and nuance that formal analysis can provide.”

Bogel has taught in Cornell’s English department since the 1980s, when he came as director of the expository writing program (later, the Knight Institute for Writing in the Disciplines). He teaches undergraduate and graduate courses mainly in 18th-century literature, in critical theory and in the reading of poetry.

His research has focused on Alexander Pope, Samuel Johnson, later 18th-century English literature, theory of satire, modern critical theory, and formalist criticism. He is currently at work on “The Matter of Emotions: Affect and Mechanism in Eighteenth-Century Literature,” a study of literature, philosophy, aesthetic theory, theories of acting and sentimentality that explores the ambivalent movement between materialist and volitional accounts of affective and aesthetic experience.