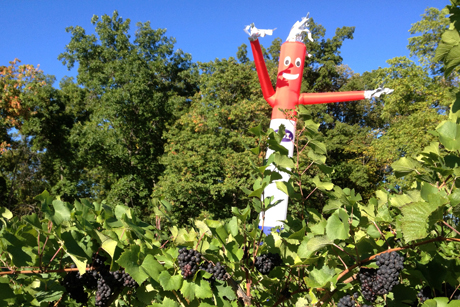 Those large, inflatable plastic characters that loom over used car lots have a new purpose: scaring away birds that cause hundreds of millions of dollars in damage to U.S. orchards and vineyards.

The inflatables, called “scary dancers” or “air dancers,” are upward of 15 feet tall, move randomly with arms flailing, come in multiple colors and reflective tape, and have noisy fans – all attributes that scare birds away.

“My observation is that they worked better than any of the other things that were tested,” said Heidi Henrichs, a Cornell graduate student in the field of natural resources, who has been conducting fieldwork in New York state to assess bird damage to orchards across the country for the past two summers. “The vineyard managers and people who worked around these places said they just didn’t see birds like they normally do when these [figures] are dancing,” she added.

Other techniques tested included netting around shrubs, bird calls piped through a solar speaker system that randomly mimic danger-warning calls from different bird species, and dummy hawk kites hung with fishing line from a pole above fruit trees. A ban by the Environmental Protection Agency in the 1980s of a chemical taste deterrent called Mesurol has left growers searching for workable options.

Henrichs has assessed damage and collected loss data to compare with results from last year and grower-reported surveys. These assessments include looking at edge and interior fruit damage to randomly sampled trees, counting damaged fruit and recording bird movements and foraging behaviors.

“Bird damage is going to continue to be a problem for growers,” said Paul Curtis, associate professor and wildlife specialist in the Department of Natural Resources, who leads and oversees fieldwork and extension in New York.

A Web-based survey of fruit growers developed by Cornell’s Human Dimensions Research Unit and administered across California, Michigan, New York, Oregon and Washington revealed a total of close to $200 million in self-reported losses due to bird damage; growers claimed most techniques for managing bird damage were ineffective. The survey was delivered to growers with Honeycrisp apple, blueberry, sweet and tart cherry, and wine grape crops.

The results were reported May 2013 in the journal Crop Protection, authored by a multi-institutional team of researchers, including Curtis.

The study also reported the total benefits of managing bird damage was estimated at up to $834 million, but most known techniques for damage management were either slightly or not at all effective.

While wild turkeys did minimal damage, American robins and European starlings were the most destructive for all fruit crops, with the exception of Honeycrisp apples, which American crows damaged most.

Also, mobile birds are unpredictable, causing high damage one summer and slight damage the next, Curtis said. “Species like starlings, with flocks of hundreds of birds, can move in and a grower can lose a lot of fruit in a hurry,” he added.

The project is supported by a three-year, $2 million multi-state USDA-National Institute of Food and Agriculture Specialty Crop Initiative grant, with Cornell receiving $517,000.