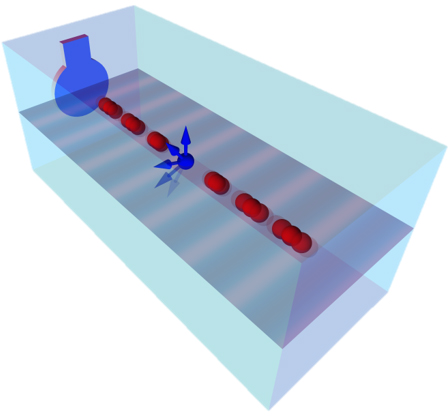 Evan MacQuarrie
A schematic drawing of the device, which includes a transducer that produces gigahertz-frequency standing waves within diamond.

Contrary to many textbook illustrations, electrons aren’t just balls floating around an atom. In quantum theory, they’re more like little tops, exhibiting “spin,” and each creating its own tiny magnetic field.

Learning how best to manipulate these spins could open up technological advances in everything from quantum computers to encryption protocols to highly sensitive detectors. Usually, scientists exert control over electron spins by applying magnetic fields. It is the same concept that gives us magnetic resonance imaging: A strong magnetic field influences the spins (in MRI’s case, of the nuclei) inherent in billions of hydrogen atoms in the body, enough of which can be converted into medical images.

A collaboration of physicists and engineers has found a new way to control electron spins not with a magnetic field but with a mechanical oscillator – a demonstration of electron spin resonance that’s “shaken, not stirred,” said lead researcher Gregory Fuchs, assistant professor of applied and engineering physics (AEP).

Fuchs and the research team showed that an oscillator – a transducer moving at extremely high frequency – can drive the transitions of electron spins (a phenomenon called spin resonance), within defects commonly found in the crystal lattice of a diamond. Their results were published online Nov. 27 in the journal Physical Review Letters. 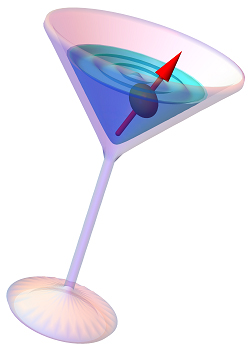 Evan MacQuarrie
The researchers call their electron spin resonance demonstration “shaken, not stirred." While ordinarily spin resonance is induced by “stirring” a spin with a rotating magnetic field, in this work it results from “shaking” a diamond crystal with a mechanical oscillator.

In conventional magnetic resonance, a rotating magnetic field twirls around at the same rate as the electrons “spin” – the magnetic field is “stirring” the spins. Instead, the Cornell researchers used an oscillator to “shake” the diamond lattice to directly flip the spins.

Their experiment involved looking at electrons spins within a naturally occurring defect in the crystal lattice of a diamond, called a nitrogen-vacancy center. Spins found within these defects are a promising platform for studying quantum spin control.

To complete the work, Fuchs collaborated with Sunil Bhave, associate professor of electrical and computer engineering, whose expertise is in high-frequency microelectromechanical systems (MEMS). They used a transducer, which acts like a small speaker, to vibrate the lattice by applying AC voltage. This created a standing wave inside the diamond, and the stress from these waves on the defect created the electron spin resonance. They measured the values of the spin using a microscope that senses the fluorescence output of the spins.

From the gigahertz-frequency oscillations, they demonstrated direct coupling of spin states within the diamond defects without the use of a magnetic field.

A device built around such a system could be useful in MEMS or for a precision sensor, Fuchs said. Their research is a breakthrough in the field of spin-based quantum technologies, in which scientists are trying to understand and control physical phenomena at the most fundamental scales.

“We are just taking baby steps to try to understand these interactions, quantify them and see what can be done,” Fuchs said. “What we’ve done is the very first thing –showing that you can do spin resonance using mechanical oscillations.”

The research was supported by a seed grant from the Cornell Center for Materials Research, which is funded by the National Science Foundation (NSF). The Department of Energy also contributed to the research. Device fabrication was done at the NSF-supported Cornell NanoScale Science and Technology Facility.