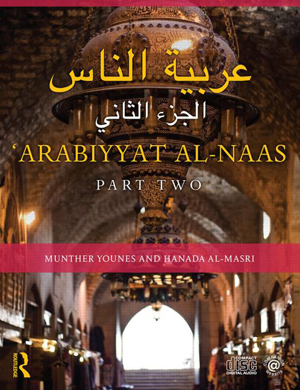 For students of Arabic, studying only the written language isn’t very helpful if they want to actually talk to someone. Unlike most languages, conversational Arabic differs from the formal written language, called Modern Standard Arabic.

“At Cornell, we treat both written and spoken Arabic as equally important and necessary for students,” said Munther Younes, a Reis Senior Lecturer of Arabic Language and director of Cornell’s Arabic Language Program, who co-authored with Cornell colleagues three new textbooks that follow the “integrated approach” to Arabic instruction.

The underlying philosophy of the approach is to introduce Arabic in the classroom in a way that reflects the use of the language by native speakers. “Our students learn to read and speak Arabic as it is read and spoken in real life in the Arab world,” Younes said.

Along with the new books, Younes is planning a summer 2014 workshop to help other universities adopt the new curriculum. And Near Eastern studies plans to renew a revamped Arabic immersion program that offers an accelerated course in Arabic in the fall at Cornell, followed by a spring semester studying and living in Jordan.

The approach is somewhat controversial, especially among teachers who come from Arabic backgrounds, Younes said. Many feel that teaching reading, writing and grammar in formal Arabic should be sufficient.

“They didn’t need to learn the spoken language because they spoke it at home,” Younes said of these native speakers. “They can’t concede that the needs of American students are different.”

Still, he has found allies for the integrated approach, particularly among Arabic teachers who were not traditionally trained in the Arab world, such as graduates of English programs and American teachers who learned Arabic as a foreign language.

Interest in Arabic and Near Eastern studies has risen at Cornell since 2001, Younes said, with many students curious about the culture and language and others focused on careers in international politics or government, where knowing the language will be useful.

Kelsey Bent ’14 learned some Arabic as a child while her parents were stationed in Tunisia and Eritrea, but wanted to pick it up again in college. She said taking part in the immersion program helped her become a fluent speaker.

“I could comfortably argue my cab fare, fend for myself in the crowded markets and abide by the program's language pledge (which required students to speak only Arabic during their entire stay in Jordan),” she said.

Emily Koppelman ‘13 picked an Arabic class on a whim, but decided after her first year that she wanted to become fluent, so she also took part in the immersion program. Today, she lives in Amman, Jordan, and is working to start a language institute there. The institute is focused on using Younes’ method to train students from around the world who have no prior experience with Arabic to become fully functional listeners, readers, speakers and writers. This process takes 40 weeks or 630 hours of classroom instruction, Younes said.

“We are adapting [Younes’] program into a training center which will engage students from diverse backgrounds: university students studying abroad, businesspeople, diplomats and others,” Koppelman said.