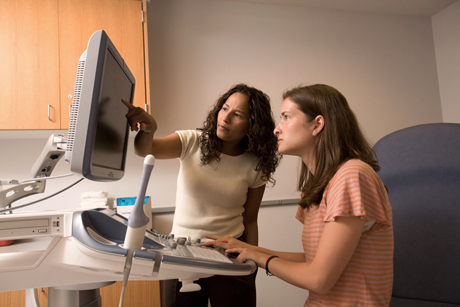 Having multiple ovarian follicles is the leading cause of infertility in America, with wider implications for cancer, cardiovascular disease, metabolic syndromes, hormonal imbalance and mental health. Yet we may be going about its diagnosis wrongly, report Cornell researchers.

Reproductive physiologist Marla Lujan, assistant professor in nutritional sciences who studies the causes, diagnosis and treatment of polycystic ovary syndrome (PCOS), has found that the guidelines used to diagnose the disorder have not kept up with advancements in ultrasound technology.

Her analysis – reported in two studies co-authored by Jacob Christ ’13 and three other students in the May issue of Human Reproduction and the upcoming issue of Fertility and Sterility – may lead to a new set of protocols and diagnostic thresholds.

When ultrasound was first introduced as a key diagnostic tool for PCOS a decade ago, doctors were advised to count the number of follicles that are characteristically found in polycystic ovaries; more than 12 per ovary was considered the threshold, as per the work of French scientist Didier Dewailly.

But Lujan was finding that healthy women commonly had 12 follicles per ovary, with no other indication of PCOS, a multifaceted syndrome that can produce menstrual aberrations, lack of ovulation, high levels of masculinizing hormones and metabolic disorders.

She wondered if improved imaging equipment was leading to finer follicle detection and whether the threshold should be raised accordingly. Her study on 142 women – 82 with PCOS, 60 without – and a review of a decade’s worth of literature and case studies, led to her conclusion that the threshold should be 26 follicles per ovary.

“We are able to see many more follicles than ever before. The old recommendations were an artifact of old technology,” Lujan said.

Lujan’s new recommendation – now backed by Dewailly – will be presented to an international consortium as part of the Androgen Excess and PCOS Society’s recommendations for the revised definition and significance of polycystic ovarian morphology.

“We don’t know what effect it will have on the number of women being diagnosed with PCOS, which is on the rise,” Lujan said. “Because of PCOS’s association with obesity, I think the upward trend still exists, but the number of healthy women flagged with the syndrome should come down. That has many implications, including access to care.”

Lujan hopes the revised threshold will provide more reliable, nuanced data that will help not only patients and clinicians, but also researchers. PCOS patients seem to experience different mixes of symptoms, of varying severity, and Lujan studies it as a spectrum disorder, exploring whether risks, prognosis and treatments should differ accordingly.

“Right now PCOS patients are all thrown into the same bag,” Lujan said. “At least moving forward, we will have better metrics to make decisions on what the actual spectrum for PCOS is.”

In trying to understand the causes of PCOS, Lujan would also benefit from more data from the age of its onset: puberty. She hopes to begin studies on adolescents – both healthy and those suspected to be at risk – but that may require different diagnostic thresholds, which have yet to be developed.

“There is a real need to define numbers for adolescents and older women,” Lujan said.

Stacey Shackford is a staff writer for the College of Agriculture and Life Sciences.