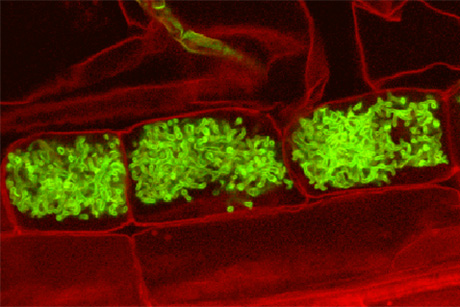 BTI/Harrison Lab
Arbuscules, portrayed in green, inside the roots of the Medicago truncatula legume plant, shown in red.

Boyce Thompson Institute and Cornell researchers have identified a plant protein called DELLA that may lead to reducing phosphorus-fertilizer applications on farms and better plant growth in poor soil.

Plant biologists have long known that through “mycorrhizal symbiosis” – an interface between the plant roots and the soil – plants regulate formation of arbuscules (branched, treelike structures) in response to their own phosphate needs. The mycorrhizal fungus transfers phosphate from the soil into plant cells through the arbuscules and – in exchange – the plant feeds the fungus with sugars.

The researchers analyzed a legume plant (Medicago truncatula) to show that DELLA proteins are essential for arbuscule formation.

When a plant is phosphate-starved, DELLA protein levels are high, and this restrains plant growth. But in mycorrhizal associations, this protein promotes arbuscule formation. “Once arbuscules have formed, phosphate is delivered to the plant and the plant growth increases,” said corresponding author Maria Harrison, the William H. Crocker Scientist at Boyce Thompson Institute and a Cornell adjunct professor.

Phosphorus fertilizers can be costly to farmers, and without the help of beneficial mycorrhizal fungi, much of a fertilizer’s nutrients can be out of reach of the plant roots, unabsorbed in the soil and washed into waterways, to the detriment of nearby ecosystems.

Green Revolution crops contain dominant DELLA protein mutants, which show more arbuscules and fungus in the roots, say the researchers. Consequently, the breeding for high yielding dwarfs – the Green Revolution-style breeding – had unanticipated consequences on the mycorrhizal symbiosis. The researchers’ experiments imply that growing these crops will have increased the amounts of mycorrhizal fungi in the soil and will influence soil health in a positive way.

Amanda Gurung is a science writer living in Ithaca, N.Y.

Agribusiness panel to Congress: Get us workers (Dec. 2013)