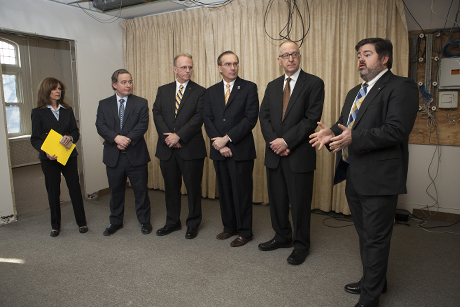 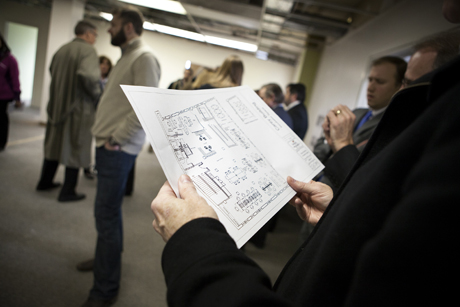 Lindsay France/University Photography
A visitor looks over the floor plans for the Downtown Ithaca Incubator.

Billed as a hub for economic activity throughout Ithaca and Tompkins County, the new Downtown Ithaca Incubator promises to channel rising entrepreneurs into the region to work, grow and thrive.

A collaborative venture among Cornell, Ithaca College and Tompkins Cortland Community College, the incubator was launched at a Jan. 16 media event attended by local government officials, community leaders and friends of all three institutions. It is located at 314 E. State St. in the Carey Building in downtown Ithaca.

The incubator is part of the new Southern Tier Innovation Hot Spot, a regional economic development initiative that just received a three-year, $750,000 award from the state’s Regional Economic Development Council. One of five in New York state, the Hot Spot is headed by partners Cornell, Binghamton University and the Ceramics Corridor Innovation Center.

Just over a month ago, Gov. Andrew Cuomo announced the third round of Regional Economic Development Council awards, with the Southern Tier receiving $81.9 million to fund 87 projects, including $1 million toward Ithaca’s new business incubator.

“The incubator will serve as a focal point for the growing startup ecosystem here in Tompkins County, in the space we’re standing in today,” said Mary Opperman, vice president for human resources and safety services, who represents Cornell on the Southern Tier Regional Economic Development Council. She noted that the incubator “leverages important state programs,” and she thanked New York state for “its recognition of the importance of economic development at the local and regional level.”

Once companies “graduate” from the incubator, they may become eligible for additional tax incentives through START-UP NY, a program that provides tax-free areas and support to young companies.

The purpose of the Downtown Ithaca Incubator is to provide resources, mentorship and physical space for budding entrepreneurs, regardless of whether they are affiliated with Cornell, IC or TC3. Rather than a permanent home for companies, it will serve as a supportive, flexible, co-working environment that will help entrepreneurs form and grow startup companies, with the ultimate goal of increasing economic activity within the region.

Sedgwick Business Interiors
A rendering of the Downtown Ithaca Incubator.

Cornell President David Skorton praised the “tremendous partnership” among Ithaca’s three higher education institutions that have launched the incubator, and noted that it belongs not to any one school, but to anyone who might benefit from it.

“This is not institutional space. This is community space,” Skorton said.

An entrepreneur who has worked with several startup companies since moving back to Ithaca six years ago, Schryver said, “This is the kind of place we’ve all been waiting for, for a very long time.”

Schryver described the incubator as a kind of concierge service for startups and potential startups.

“We feel very strongly that there’s no need and no benefit to directly duplicate what’s already here,” he said. Instead, “entrepreneurs can come here and get directed to support resources that are already out there, that we’re not necessarily replacing.”

Partners for the incubator will include the three institutions, as well as others who will provide support to entrepreneurs in the area and region, among them Tompkins County Area Development and the Southern Tier Regional Economic Development Council.

During the Jan. 16 event, developer Frost Travis led a tour through the historic building, owned by Travis Hyde Properties, where the incubator will make its home. Plans include a fully remodeled second floor of the Carey Building by summer 2014. Also in the works is a third-floor expansion by early 2015, creating an eventual 9,000-square-foot working space.

Cuomo: No taxes for firms linked to upstate colleges